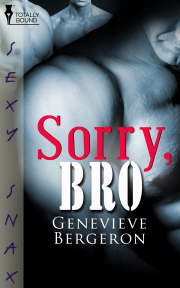 Still aching from the mistakes and denials of his past, this ER nurse could heal anyone but himself…until now.

Handsome, athletic and intelligent, twenty-six-year-old Bryce should be living the high life.

But he's far from it.

After shunning his best baseball buddy in high school, dropping out of medical school and fleeing New York to put down roots—if only shallow ones—in New Orleans, Bryce is uncertain about both his past and his future. Working long hours as a low-level nurse and confined by a sexless relationship with a questionably devoted girlfriend, Bryce can't shake the feeling that things should be somehow better now he's escaped the confusion and indecision of his former life.

Yet when the ghost of Bryce's high school past, the handsome and charismatic Tim, shows up injured in the ER, Bryce's already turbulent emotions engulf him in a vortex of confusion and regret. Haunted by his own insensitivity towards Tim eight years before, Bryce first finds comfort in the powerful arms of a resident surgeon he barely knows, then gives Tim the explosive, cataclysmic relief he had denied him in high school. As Bryce comes to terms with his sexuality and recognises his undeniable attraction to both men, he must decide, once and for all, where his fidelity—and his desires—lie.

Bryce’s chest and abs retained the tell-tale glisten of the balmy New Orleans weather. As the cool air of the hospital locker room washed over him, goosebumps spread across Bryce’s back, prickling the short, dark hairs on his forearms and in the valley between his pecs. He shivered, and his nipples hardened as he pulled his white V-neck swiftly up over his head.

He could dry at least of a few of the droplets of cold sweat from his body before he got dressed. Bryce ran his damp shirt roughly across his shoulders and around his lower back before balling the fabric in his hands and tossing it into the bottom of the open locker in front of him.

Bryce had ridden his rusted, hand-me-down bicycle up Esplanade Street, across North Rampart and a mile into the Central Business District, and the whole way, his body had seemed to pull humidity towards it. An otherwise leisurely ride had left him completely damp and uncomfortably chilled once he had arrived at the hospital to change into his scrubs. By now, the bumpy journey across the glass-littered, cracked sidewalks and potholed streets had become a well-practiced performance.

Summer in New Orleans made Bryce yearn for a beach—even a desert, anywhere without so much sticky humidity. Or better, for a job that would afford him a car, with air conditioning, to ride to work in.

Bryce’s hard nipples burned in the chilled air, and his skin tingled. He and his girlfriend, Tatum, hadn’t had sex in over three weeks—and his body knew it. His bed—now, at least—was colder than the artificial chill in the hospital locker room.

Bryce had come to New Orleans from New Jersey to escape two things—a routine life and the cold. Against his parents’ wishes, he had followed his high school girlfriend, Jennifer, to medical school in New York. Soon afterward, he’d dropped out to study nursing. In New York, so close to his family, and so close to the same girlfriend he’d had since he had been fourteen, it was hard to escape routine. Work, subway, sleep, tired sex, work, subway, sleep, more tired—and unfulfilling—sex.

After finishing nursing school, Bryce had figured he could find a new beginning in New Orleans. Everything was different—different scenery, different people, different weather, a different hospital. That had been nearly a year ago. "Damn," Bryce breathed. An entire year.

Nothing had changed. Not really. Maybe the food was richer in the south, and maybe the weather was hotter and balmier. And maybe his girlfriend was named Tatum and not Jennifer, but everything was fundamentally the same. Work, bike, sleep, tired sex. Maybe a quick fuck in a seedy bar bathroom if he could get Tatum to shoot enough tequila.

But New Orleans should’ve been different.

At the very least, Tatum could’ve been different. She had been a real firecracker—in the beginning. Sex three times a day had turned into one drunk fuck a week, if that. And if they weren’t drunk fucking in the back of a bar, they weren’t fucking at all. For the past few months, Tatum had spent Bryce’s off night drinking and weekends taking trips to Biloxi with the Uptown sorority girls. Hell, they were seeing so little of each other now that it would be no surprise if Tatum were fucking tourists on Bourbon and Ole Miss fans at the cheap casinos in Mississippi.

Tatum would say, "You work too much. You’re so boring sometimes, hon, and I need excitement."

There was no changing it.

Bryce shook the sweat from his head and smoothed the moisture back through his short, dark hair before pulling on the top of his scrubs. He wrapped a red bandana around his head, just above his sunburned ears.

Bryce fumbled at his belt and unzipped his fly. Just as his nipples had sprung to life as the cool air washed over them, his penis hardened slightly. "Fuck," he whispered, glancing surreptitiously up and down the row of lockers. A moment before, the room had been empty.

Now, at the opposite end of the row, a tall, shirtless man had just tossed a striped polo into a navy blue gym bag. He turned just as Bryce looked his way.

Genevieve Bergeron has been an avid reader and writer of digital fiction for nearly two decades. A veteran journalist, children's author and professional communicator, Genevieve now spends her time reading and writing hi-tech inspired romance and erotica, in addition to working a fast-paced day job as a communications director at a U.S.-based national nonprofit.

Genevieve, originally from Huntsville, Ala., has lived in New Orleans and Paris, and now resides in Washington, D.C., where she does her best to avoid any steamy political scandals. She holds a degree in International Communications and French from Tulane University and a Master's Degree in Strategic and Digital Communications from Georgetown University. She loves collecting condoms, cooking for friends, and trying boxed wines.

if you enjoy hot threesomes that help them in the process, and if you're looking for a story that focuses on the physical aspect of a developing relationship, then you will probably like this short...

Share what you thought about Sorry, Bro and earn reward points.