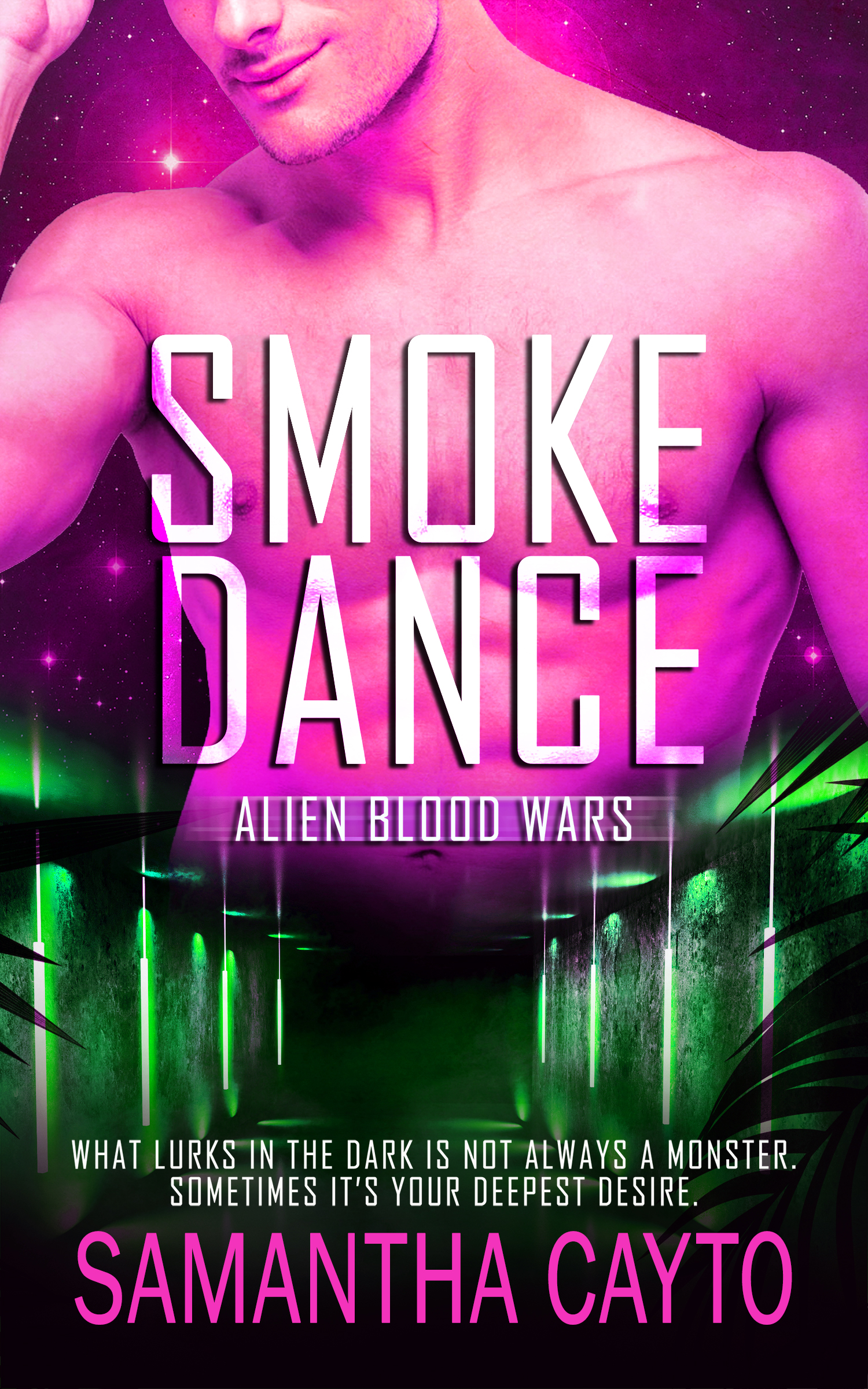 What lurks in the dark is not always a monster. Sometimes it’s your deepest desire.

Willem is a good drone, a consummate pilot and an obedient and deadly warrior. He has sat out the war with Dracul for many years, raising the only hybrid daughter among their kind. For years, he kept that information from the others, but when Will answered the call to arms, his secret came out. Yet there is one more secret that could change Earth forever. Because he is determined to both keep it and help bring the war to an end, he will not risk taking another lover. The problem is that he didn’t count on the irresistible temptation of the club’s sous chef.

Damien’s life has been hard. Coming out as gay left him homeless and desperate. If not for the kindness of the strange Stelalux family, he would have ended up living on the streets for years. He loves being a chef and would do anything for the family, now his friends. He didn’t plan on falling for one of them, however. The new and compelling Willem tests his resolve to not get involved with any man, and despite his best efforts, he finds himself lured into the man’s bed.

With new trouble brewing, Will has no choice except to turn to Damien for help. The human is willing to put himself at risk, not only out of gratitude, but also out his growing love for Will.

Reader advisory: This book has some violence and a gay conversion subplot. The book is best read as part of a series.

Damien pulled out his double batch of cinnamon rolls and placed the tray on one of the cooling racks on the kitchen counter—right next to the first double batch. He’d learned pretty quickly that when cooking for the Stelalux family, you had to re-define the meaning of ‘extra’. He’d never seen any group of men put away so much food in one sitting—or twenty sittings, for that matter. They had an endless capacity to pack away the calories without ever gaining an ounce of fat. It was as if they’d mastered a way to convert sugar into seriously jacked muscles. Working for them was a gay boy’s wet dream, for sure.

But that wasn’t why he came to the family’s personal apartment building most mornings after working all night in the club’s kitchen. It had nothing to do with watching drool-worthy men devour his meals with hearty appreciation. He had plenty of that at the club, where the members showed no end of delight at his cooking—and at him, as well. There had never been a time when he hadn’t had to politely fend off all kinds of offers. Most of them were thinly veiled attempts at seduction, even though they came wrapped up in job offers to become a personal chef. Many of the members were gorgeous, and they were all rich. But he turned them down. He wasn’t going to leave Lux’s kitchen any time soon.

It was all about gratitude and his endless need to show his appreciation for what this family had done for him. Emil Stelalux had quite simply saved his life. Damien owed him, big time. The kindly chef had brought him in literally from the cold and had taught him how to make a real living, instead of surviving on his knees in an alley—or, worse somehow, letting a strange man use his body just to have a safe, warm place to sleep for the night and access to soap and water. Being a street rat had seemed his only choice at the time. Emil had shown him otherwise.

So, yeah, putting in the extra hours to prepare breakfast for the family was the least he could do. Knowing that the men and the boys that they’d let into their lives loved sweets, he always baked something to go along with the mountain of eggs and meat that they also craved. This morning he’d prepped veggies and grated cheese for omelets and had a few pounds-worth of apple-smoked bacon to go with it. In a few minutes, the inhabitants of the apartments would wander downstairs looking for food. He was ready for them.

Damien was in the process of pouring himself another cup of coffee when a voice startled him.

Jesus, how does she always manage to sneak up on me?

Sucking on the side of his finger where he’d sloshed coffee, he turned to greet the girl. “Hi, Annika.” He plastered a grin on his face, even as he busied himself with sipping his drink.

The girl’s gaze homed in on his hand. There was something really freaky about the way she looked at everything intensely—and knowingly, as if she were the master of the universe. Or the mistress more like, since there was nothing she didn’t notice. Her bright blue eyes, so different from the others of her family, flicked up at his. He felt an almost irresistible urge to squirm.

“Did you hurt yourself?” As she asked the question, she walked into the kitchen area. She was dressed in a long, white lace nightgown, looking like some Victorian miss. Her bare feet made no sound, even when they hit the tiled floor. The way she walked with such easy grace made it seem as if she were almost floating. The mop of white fluff masquerading as a dog pranced beside her, as always. Its nails click-clacked, breaking the eeriness of its mistress’ approach.

Damien cleared his throat to hide his unease. “Um, no. Not really,” he amended, because he couldn’t quite bring himself to lie to her. It was so freaking weird. She reminded him of his granny, like she would rap his knuckles or something if he dared try to answer with anything but the truth. And this was true, even though she was a tween.

She appeared satisfied with that answer. Her gaze slid from him to the rolls. Her eyes lit up, morphing her into just another kid. “Those smell delicious. May I have one, please?”

He was on surer footing now, serving up his food. “Of course. Why don’t you sit and I’ll plate one for you.” He turned back to the kitchen’s island and put his mug down to do just that. “And you want a glass of milk, right? Chocolate, I presume?”

“Yes, please.” Annika practically skipped out of the kitchen area and over to one of the high chairs ringing the counter. She hopped up on one with that same ease of movement. The dog, Babette, sat its fluffy butt down by her food dish and looked up at Damien with wet, hopeful eyes. He shook his head at it.

Not a chance, sweetheart. You’re the kid’s domain.

Damien picked a fat roll from the first batch, because he’d already iced those. Then he pulled out the bottle of chocolate milk and poured a tall glass for her. He handed it all over without a qualm, knowing that her father allowed her to eat anything she wanted at any time. To say that the child was indulged was the understatement of the year. The entire family treated her like a little princess, acting as if the world revolved around her. It wasn’t surprising, really. In a family dripping with the heaviest amount of testosterone outside of something like a Navy SEAL team, she was an obvious anomaly. The Stelalux men orbited her like massive dark planets around a blinding sun.

It wasn’t merely that the foreign family with their hard-to-place accents and their military bearing was heavy on the Y chromosome. They were all gay, as well. Whatever genetics were involved in sexual orientation, it had completely blown the statistical modeling when scrambling to form the Stelalux men. Forget about arguing over two percent versus ten percent. From what he’d seen, the family was one hundred percent gay and perfectly at ease with the situation. It was one more thing he admired about them. With the whole surrogacy thing still gaining traction, he couldn’t imagine what Harry and his husband had gone through to bring their son, Demi, into their lives. At least the boy looked like his parents. Annika was a whole other matter. It seemed impossible that she was related to her Stelalux father by blood. He suspected she was the product of a more typical hetero relationship of Will’s dead partner. Either that, or said partner had been the sperm donor.

Not that he’d dare to ask or anything. Regardless, she was astoundingly beautiful, angelic even.

Annika grinned widely at him with icing-sprinkled lips. “This is scrumptious, Mr. Damien. Thank you ever so much.”

Jesus, she talked like some character out of a Dickens novel. It left him tongue-tied, feeling the inadequacy of his truncated education. “You’re welcome,” he murmured, before retreating to the relative safety of his mug of coffee.

He pretended to be busy in the awkward silence that followed. Well, it was awkward for him. He wasn’t certain this obviously brilliant and undeniably unusual child ever felt uncomfortable in any situation. She exuded a confidence that few adults could pull off, as if wherever she was and whatever she was doing, it was right and proper because it was her.

Then his eye caught the time and he knew that others would be joining them soon. He needed to get the bacon started. No one had asked, let alone demanded, that he add making the family breakfast and some other occasional meals in their new personal quarters to his list of duties. He did it because he liked doing so. Keeping the Lux Club members well-fed was rewarding enough, he supposed. It certainly allowed him to test the range of his skills. There was something almost anonymous about it, though. He rarely got to see them enjoying their food. It had always been the family’s appreciation that he’d used to judge himself. Since renovating the adjacent building into a large residential space, they no longer came into his kitchen—well, Emil’s kitchen really—so he’d lost that contact. This was his way of maintaining it.

He’d just slid the first tray under the broiler when the sound of footsteps making their way down the staircase leading to the upper floors caught his attention. Damien froze for a second before straightening and grabbing a super-sized mug from the cabinet. He recognized who it was, although how, he couldn’t say. There was nothing in particular about the tread of Annika’s father that distinguished him from his family members, yet Damien always knew when it was him, nevertheless.

His heartbeat ticked up a notch, which kind of irritated him. He’d sworn off becoming attached to men once he’d come off the streets. He wanted to focus on his profession in order to ensure his future security—no more dependence on someone forged by sex. Sure, a random from a club for a quick fuck or blow job was fine, but nothing serious. Not yet. Maybe when he was thirty, he’d start thinking of finding the right man and settling down. But this almost-school-boy crush on the guy was too ridiculous.

Share what you thought about Smoke Dance PRINT and earn reward points.

Other books in the Alien Blood Wars seriesView Series Page