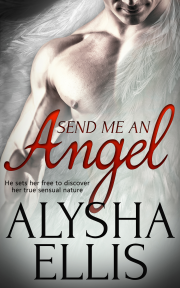 Send Me An Angel

It’s not every day a woman opens her door to find a gorgeous, naked man asleep on her front step. But then, a man claiming to be an angel is no everyday occurrence.

Wherever Matthew has come from, and whatever his purpose, one thing is for certain. Sex with him is the closest Ellie has ever been to heaven. And she’ll fight anyone or anything that tries to take her angel away from her.

Publisher's Note: This book was previously released  under the same title by Totally Bound Publishing. It has been expanded, revised and re-edited for re-release.

Ellie stared down at her porch, speechless with fear and outrage. If this was her friends’ idea of a joke thirtieth birthday present, heads were going to roll—right after she called the cops to arrest the naked man asleep outside her front door.

“Hey! You! Pervert! Get the hell away from here!” To make her point a little clearer, she gave him a nudge—okay, might as well be honest and call it a kick—in the ribs.

The man didn’t stir. Ellie’s fear faded, replaced by concern. Maybe he wasn’t a sexual predator and maybe he wasn’t asleep. If he was unconscious, instead of the police, she needed to call an ambulance.

Since she couldn’t see any blood or obvious sign of injury, she squatted down to take a closer look. His chest rose and fell regularly, so she knew he wasn’t dead. His pale golden skin appeared unmarked except for the faint red patch where her foot had slammed into abs that any of her gym junkie male acquaintances would give ten years’ supply of protein powder for. He had to spend a fair bit of time in the gym himself. No one got shoulders like that without lifting a lot of serious weight.

His legs were drawn up, his arms held between them, hands cupping his male parts. Long, golden hair covered his face in a tangled mess.

He looked as if he’d been picked up by a whirlwind and deposited at her door.

Except this wasn’t Kansas and he certainly was no Dorothy.

Ellie leaned closer and put her hand on his muscled shoulder. It was warm and smooth and… She snatched her wayward fingers back.

She should be rendering first aid, not petting him.

He lay on his side, meaning she didn’t need to roll him into the recovery position. His breathing was regular and unrestricted, so there was no need to try to clear his airways. That left keeping him warm and calling for help.

She sighed. Covering that body probably counted as a sin, but leaving him to get chilled would be inexcusable.

She turned to go back inside to get a blanket and her phone. A guttural moan stopped her before she’d taken a single step.

She spun back around. The stranger groaned again—a painful sound wrenched from somewhere deep inside him.

Ellie dropped to her knees. What did the first aid manuals say to do if the patient was conscious? Reassure them? She wasn’t sure he was conscious, and she definitely didn’t know what there was to reassure him about, but she had to do something. “Um. Just relax. You’re all right. Nothing to worry about.”

This time the groan came from her. What a stupid thing to say. She had no idea if he was all right or not. He was a stranger, with no apparent belongings and no place to have ID or money secreted about his very naked person. He had good reason to worry.

A shudder rocked his body. Ellie’s heart raced, panic bubbling to the surface. What if he was having a seizure? Or a heart attack? She wished she’d grabbed her phone before she’d opened the door this morning. But living on a small acreage meant she’d forgotten most of the security precautions those in the city took for granted, and when she’d heard the thud on her front veranda, she’d assumed it was a possum or a dog and gone, unconcerned and unsuspicious, to chase it away. Clearly that had been a mistake.

There were no neighbors within shouting distance, no one to help her. Something had to be done and at the moment she was the only person there. The man was too well built for her to move on her own, and if she tried, she could do more damage. She had to go inside to get her phone. It would only take a few seconds.

She opened her mouth to tell him she’d be back, but snapped it shut again when he rolled onto his stomach, braced his arms underneath himself, and pushed onto all fours.

He held himself there, his head hanging down, his bare back glistening with sweat. A few stray leaves clung to the skin, but Ellie barely spared them a glance.

She must be the most horrible, heartless woman in the world, because here was this poor man, sick or injured, and was she rushing to his assistance? No, she was staring at one of the finest arses she had ever had the privilege to see.

Fortunately he didn’t seem to require her assistance. While she’d been berating herself, he’d raised himself onto one knee. She couldn’t help but notice his penis, which hung thick and long between his corded thighs.

The powerful shoulders and thighs flexed and strained and he pushed himself to his feet.

Ellie’s breath caught in her lungs. Her entire attention was riveted on the man in front of her. She’d get to the bottom of this mystery…later. If her friends had set her up, someone would die, but not right now. Right now she was having trouble even thinking.

Share what you thought about Send Me An Angel and earn reward points.