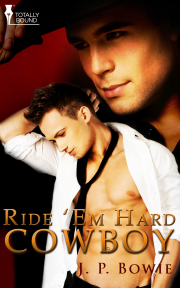 Sheriff Joel Harper is being sued, but when he meets young attorney Jason Sherwood, he wants him to handle much more than just the lawsuit!

When Sheriff Joel Harper, ex-wrangler, is falsely accused of assault and battery by a rich rancher's son, he turns to Royce Chandler and Charles Fletcher for legal advice. What Joel doesn't expect is to fall immediately in lust with young attorney Jason Sherwood, Royce's new recruit to his recently opened law office.

Their budding romance is hampered by burglary, hate-filled graffiti, hostile neighbours and co-workers, and by Joel's own sense of responsibility to his younger brother, Toby. Can their love survive all that's thrown at them or will Jason decide the ride is just way to rough for him to endure?