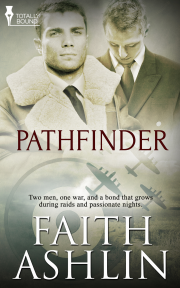 Bobby is fighting fervently amid the planes and bombs of World War Two when events take a passionate turn with the arrival of a new pilot. Can Lewis offer him more than he thought possible?

During the Second World War, two airmen from Texas join the Royal Air Force, while America is still neutral. The attraction between them is immediate. Bobby, a navigator, has given up on thoughts of relationships, concentrating instead on the war he fervently believes in. Lewis, his new pilot, is full of life, and passionate about planes and playing his part in the war.

They connect immediately with intense, but furtive, sex. Their bond grows during many tough raids and passionate nights, until Lewis pushes Bobby to admit how he feels. Bobby didn’t think love was a possibility. But now Lewis is here, real, and offering everything he could never admit he wanted.

Can they have a future together during the war?

Bobby stood by the side of the plane, squinting as he looked up the road into the early morning sunlight, his nose crinkling up as he did so. He should put his dark glasses on, they would make life easier. He knew that. But they gave him a headache and he didn’t need one, not now. He patted his pockets, just for a diversion, but he’d left his cigarettes in his room. They gave him a headache as well.

He checked the road again. He just wanted to get started.

“Watching won’t make him arrive any sooner,” Dennis Banister said, a smile thick in his voice. “I know how keen you are but they’re right when they say a watched kettle never boils.”

“It’s all right for you.” Bobby pulled up the collar of his flying jacket, his hands needing something to do, wishing he had that cigarette. Stamping the butt out and grinding the dregs into the ground would relieve a bit of tension. “You’ve got your flying partner—you’re all set to go.”

“But the CO says we wait until your man arrives and then we’ll all start testing together.”

“Yeah, but you two know each other well—you’re a proper team. We’ll be starting from scratch.” He thrust his hands down into his pockets. Being tall meant it always felt like his jacket was riding up, even when it wasn’t. He loved his RAF uniform and always felt smart and proud as soon as he slipped the jacket on. He was sure the cap made his brown hair and gray eyes look more distinguished, dependable. He turned to stare up at the airplane—so intriguing, so much potential. His fingers itched to find out what the machine could really do. “What if this guy’s an idiot? What if he can’t fly straight?”

“Looks like you’re about to find out.” Dennis nodded to the military Jeep that was just passing the guard hut at the main gate, before heading to the control room. “Are you going over to meet him?”

Bobby thought about official welcomes and Wing Commander Stockton’s speech on ‘only the best will do’. He’d give that a miss. “No, I’ll wait here. Send him over if you see him.”

“From what I’ve heard, this chap will be just as eager to get started as you are.”

“I hope so. We need to stop sitting on our asses and start doing something useful in this goddamn war,” Bobby said quietly, but with real feeling.

“Steady on, old boy.” Dennis gripped Bobby’s shoulder, fingers tightening for a moment before he pulled away to rest his hand on the wing of the plane. “We will, but don’t rush things. This is too important to make mistakes. This little beauty could make a hell of a difference.”

Bobby’s eyes wandered over the Mosquito again. Not a huge plane, not like the bombers, and without the glamour of a Spitfire, but nonetheless impressive. A beautiful plane, freshly painted in a patchwork of brown and green, one that stood proud, nose held high. Her wings swept out gracefully, with two big propellers ready for action and the glass canopy that would protect her crew of two just visible. His mouth watered at the possibilities.

He was still there, still looking, twenty minutes later when he heard the sound of feet and turned to meet his new pilot—another big man, his dark blue-grey RAF uniform fitting snugly across his broad shoulders. His cap was pushed firmly onto thick dirty-blond hair, over a wide smile and brown eyes. He was tall… Really, really tall.

“Hi.” A big hand was thrust in Bobby’s direction. “Pilot Officer Lewis Winters, you must be Flight Lieutenant Davenport, my navigator.”

“Yeah, but…” Suddenly, there were a lot of thoughts whirring around in Bobby’s head. He’d deal with the most important first. “Can you actually fit inside a cockpit? Will there be room for me?”

Lewis threw his head back as he barked out a laugh, the sound catching Bobby off guard. There hadn’t been much laughter around him since… For a long time. “It’s a bit of a pinch, but don’t worry, I’ve had a lot of practice. I won’t squash you.” Lewis’ gaze made a swift journey up Bobby’s body, lingering on his face. “Unless you want me to.”

Bobby didn’t mind as that was a situation he could handle. But if the guy couldn’t fly, well, that was different. That he couldn’t tolerate. “A lot of practice? How long have you been flying?”

“Since I was about fourteen.” Lewis’ gaze had gone from Bobby and was now fixed firmly on the aircraft next to them instead. “My daddy flies, back home. Local trips, crop dusting, that kind of thing. He took me up with him as soon as he could convince my mom.” He slid his hands almost lovingly across the edge of a wing, moving to stand underneath, taking in every detail.

“Wait, you’re from the States?”

“Yep.” Lewis’ accent was obvious now, the twang thick, rounded and at full throttle. “From Texas, just like you are.”

“You know about me?”

“I asked around. I know a bit.” Lewis started to walk around the plane, obviously checking it with a knowing eye. “Most Americans in the Royal Air Force are with the Eagle Squadrons at present, so it seems like someone high up thought it would be a good idea to put us two together.”

So Bobby was paired with the new man because he was a Yank, not because he was the best. His face tightened in annoyance at the thought. The guy might be tall—very tall—with a body a man could spend a while getting to know, but none of that was important if he wasn’t a great pilot. “Why aren’t you in the Eagles then?”

“Because…” Lewis ran his fingertips across the fuselage, his eyes sparkling with excitement. “I wanted to get to know this baby, been requesting a transfer since I first heard about her.”

“You’re a fan of the Mosquito?”

“Are you kidding me?” Lewis turned to face Bobby again. “A bomber that’s so fast she doesn’t need to be armed, that will be in and out before the Germans even know what’s hit them. And she’s incredibly versatile. I reckon she could take on just about any job, you wait and see. They’ve already made bomber and fighter versions. I’ll bet there’ll be a fighter-bomber eventually. She’ll be the world’s fastest operational aircraft. All that and she’s made of wood. Amazing.”

“You know your stuff,” Bobby conceded, tipping his head. “I just hope you can fly as well as you talk.”

“I’ll make her sing ‘cause…” Lewis licked over his bottom lip, gaze locking with Bobby’s, and right there, right at the back, Bobby saw a little bit of hesitancy. “She’s damn near as pretty as you are.” He raised his eyebrow as his face tightened and the statement was overlaid with nervousness. Bobby knew only too well why. People might be living for the moment during the war, taking chances they never would have normally—after all, the average life expectancy for a Spitfire pilot was a meager few weeks, so an airman couldn’t afford to wait—but what Lewis had just done was one hell of a risk.

When Faith was clearing out her attic many years ago, she found a book she'd written as a ten-year-old. On rereading it she realised that it was the love story of two boys. Over the years her fascination with the image of beautiful young men, coiled together as they fell head over heels in love, became a passion for her.

Since that first innocent book—written in purple sparkly pen—she has written many stories, set in varied worlds, but always with two men finding their way to happiness.

Still nothing much has changed because now she can be found in a daydream, wandering around the supermarket, or sitting in a meeting at work still dreaming up stories.

I love historical novels, that’s no secret, but it’s rare to find one authentically set in wartime. I loved Pathfinder; it was a delight to read. Both men are so different, yet the...

Share what you thought about Pathfinder and earn reward points.

Pathfinder has been chosen as a Recommended Read for August.

It's so hard to pick only three, but I'll have a go!

• She by H. Rider Haggard. I first read it when I was about 12 and I found it really hard going. I had to look up so many words as I didn't know what they meant. But I persevered, as I loved the adventure and the idea of a mystical woman, waiting for thousands of years for the reincarnation of her love. That's the sort of love I wanted.