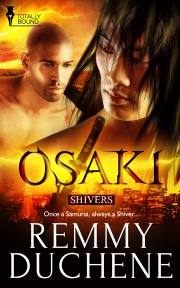 Book 2 in the Shivers series

Once a samurai, always a Shiver...

Kofi Olabasu needs a vacation. He’s spent so much time looking out for his brother and working that he’s completely neglected himself. To make matters worse, feelings for a man are driving him crazy. The moment Kofi feels Osaki, he knows something is about to change. Confused about his attraction to Osaki, he agrees to take a vacation and accepts Osaki’s offer of being Kofi’s tour guide in Japan. However, nothing is as it seems. Soon every dark corner is filled with danger and those who wish to do him harm.

Osaki has a lot on his plate and love is the last thing he has time for. Not only does he have to get used to his new powers as a Shiver and all the training it involves, but he also finds himself being drawn to a human—though Kofi makes it clear he’s into women—and Osaki must respect the man’s wishes. All Osaki really has to do is focus on training and being the best tour guide possible for Kofi. But nothing ever goes as planned and soon rogue Shivers are popping out of the woodwork, hell-bent on destroying Osaki for his inheritance. It soon becomes quite clear that they want him dead, and they’re not afraid to use Kofi as leverage—or as collateral damage.

“People eat with these things?” Ares asked, knitting his eyebrows in confusion while trying desperately to pick up a pea with a pair of chopsticks. The pea went flying and everyone at the table erupted in laughter.

“Oh please tell me the great God of War is not having issues with a pair of chopsticks!” Hercules teased before arching backward in his mirth.

“I am not used to them,” Ares replied, still trying to use the chopsticks. This time he tried for a piece of chicken. The chopsticks slipped and the meat sailed across the table. Kofi eased to the right and caught it in his mouth. Ares then hurled the sticks behind him and picked up a fork.

“It’s an acquired skill,” Carter assured Ares. “You’ll get it.”

“It took me three years to learn,” Ciro spoke up. “And I am still not as good as I should be.”

They laughed again but Kofi said nothing. He sat there, watching what was happening around the table, and though he was happy to have them all there, he still felt alone. His brother kissed Ciro quickly on the lips before Ciro wiped away something from Carter’s cheek. Kofi refocused on his plate and lifted a piece of beef to his mouth.

“Kofi, you said you were taking time away from your job?” Adrestia questioned. “What would you fill your time with?”

Kofi looked up and shrugged. “I’m not sure. I just know I need a little time off.”

“Well, you could visit us at the North Shores,” Koi offered. “And you do not have to be dead to visit.”

Kofi promised them he’d think about it. The truth was that he didn’t really like the idea, since the North Shores was Carter’s thing. He had no reason to visit but there was no need bringing everyone else down. He took a sip from his glass and slipped back into his head while the others turned their attention to Hercules, who was regaling them with tales of his trials.

While the others talked and laughed in the backyard, Kofi Olabasu feigned exhaustion and excused himself. He could feel his brother’s gaze following him. Pausing, he smiled at Carter before stepping into the house. He stopped for a moment to pour some whiskey on ice then turned for the stairs leading to his art room.

At dinner, he hadn’t managed to eat much, just enough so there wouldn’t be any questions. Each forkful that had entered his mouth had tasted strange. His stomach had lurched and cramped with each swallow. Kofi thought he was coming down with something. Suddenly, he just didn’t feel like himself. Gripping the banister, he climbed the stairs and walked into the art room he’d had built onto his place. Though he hadn’t used the room for more than five years, he’d bought new paints with brushes and begun working on stuff again right after Carter’s wedding. It’d been a little over six months since Carter had married his Shiver boyfriend in a lavish ceremony in Greece at some ancient castle, and the two of them seemed happier than ever. But while he was over the moon excited for Carter and Ciro, Kofi just couldn’t shake the weird feeling inside himself.

That strange sensation mixed with the overwhelming need to paint made no sense to him but he wasn’t going to question it. Since he had started working as a real estate agent, he didn’t have much time to paint or do the things he truly loved. His daily life had become one big race against time and bank accounts then by the time he got home, there was no energy to do anything but pass out for the night. Deep down, Kofi knew that reasoning was severely flawed but it was the only one he was willing to entertain.

With the faint sounds of laughter floating up from the others below him, he put on his apron and grabbed the brushes. He stared at the blank canvas for a moment before setting up then began with red paint. He worked until the canvas was completely covered. It was as if he couldn’t stop. Kofi sat back and smiled. He was caught up with his work but not enough to miss that familiar feeling he always felt when Osaki was near.

“Are you just going to stand there and stare?” Kofi asked without turning around. “Or are you going to say something?”

“I did not think you knew I was here,” Osaki replied. “I was careful not to make a sound.”

“I didn’t hear you,” Kofi said, placing his brush down then turning on his stool.

Osaki was dressed in a blue samurai kimono.

“I felt you. Is everything okay downstairs?”

“Everything is fine. You left a dinner you planned. I may not be human any longer but that, I do not believe, is something that is done. Am I correct?”

Osaki chuckled. “For a minute there, I thought you would say something like ‘I smelled you’.”

“Nothing like that. Why aren’t you with the others? It sounds like a real party out there now.”

“I just wanted to check on you.” Osaki walked into the room to peer closely at the fresh painting. “You did not look so well when you left us. I was merely curious.”

Kofi smiled. “Thanks… For checking on me, that is.” He turned to stare at the painting with Osaki and for a moment, neither of them spoke. “Do you have a last name?” Kofi questioned. For some reason Osaki mattered to him.

“Yes. A family name. Like I’m Kofi, my last name is Olabasu…”

“The English way, yes. In my country, my name is Hirosuke Osaki.”

“Well, look at that. I learned something new.”

Osaki laughed. “This is beautiful. What is it?”

“I don’t know. It’s what I’m feeling inside. Do you really think it’s beautiful? I mean, do you really like it?”

Kofi’s cheeks heated when Osaki turned to look at him. He took a breath and undid the apron he wore, but he pulled the wrong string and it knotted around his neck. He frowned. “This is ridiculous. I can’t even untie a stupid string now?”

“You are feeling chaos, Kofi, confusion. I think perhaps you do need that vacation. Here… Let me help you with that.”

Osaki stepped behind Kofi and tugged at the strings. His fingers brushed Kofi’s skin, sending a streak of electricity down his body. Biting his lips, Kofi held back a moan, wondering why this man’s touch caused such a storm inside him. He said nothing, nor did he try moving away. Kofi was curious, silently burning with each inadvertent stroke of his neck by the samurai.

“I don’t know anything about you,” Kofi said, happy that his voice didn’t crack. “Are you a real samurai?” 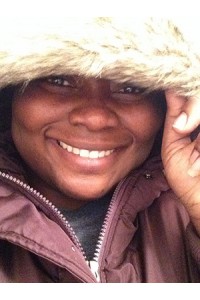 Share what you thought about Osaki PRINT and earn reward points.