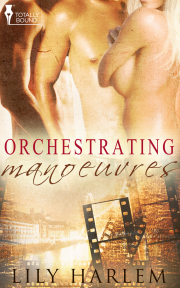 The life of a broken hearted supermodel can get pretty dull-there's only so much champagne and caviar one can handle. So, when the opportunity to hook up with two stunning Italian pianists with talented fingers, perfect rhythm and sublime composing presented itself, what could I say but yes, yes yes!

I have everything a girl could want; money, beauty, friends in high places. So why does it feel as if there's a hole the size of Antarctica in my soul?

Because missing Dale has become a way of life and now instead of making love to the man of my dreams I rely on my battery-powered Rampant Rocker and spend my days dodging work and slugging champagne-until, that is, the two heart-stoppingly gorgeous Italian pianists who make up Ingresso Livello decide they want me.

Sing praise to the Lord! That was a red letter day, I can tell you!

Reader Advisory: This book contains a M/M scene and a toy of the vibrating variety!

Publisher's Note: This story has been previously released as part of the Treble anthology by Totall Bound Publishing.

I flopped back on my mountain of pillows, gasping, writhing and shoving Enrique—my new thick, black Rampant Rocker vibrator—into my pussy higher and harder. He was great—long, wide and lined with vein-shaped ridges. And because he was so new to my collection, he seemed to have extra energy, extra enthusiasm for pleasing me. It was as if he was competing for a favoured position in my top drawer.

"Oh, yes, yes," I called out, upping the speed and finally letting his wicked forked attachment buzz around my clit. "Oh, yes, Enrique!" I twanged forward, sweat forming in my cleavage and my heart pounding. Flattening my palm over my pussy, I held him against my deliciously tormented clitoris. Electric sensations surged through my nerves. My internal muscles clamped and moisture seeped over his shaft, easing his way as I pumped his impressive girth in and out, in and out.

I squeezed my eyelids shut and instantly Dale’s face appeared before me, a hot sheen on his brow and his mouth parted as he gave in to a fierce climax. Tearing open my eyes to shake the painful, memory-laden image, I stared at the huge framed poster of my own face gracing the cover of Vogue last month and came—sharp, intense and breath-taking. God, Enrique is good, worth every penny.

Panting, I pulled Enrique out and tossed him to the bottom of the bed. He’d served his purpose. Started my day with an orgasm. That was why I’d bought him. Carlo just wasn’t doing it for me anymore, his pink, plastic shaft pale and insipid, his rotating glans no longer a novelty and he just didn’t hit the spot with his thin little ears.

I glanced at the clock and sighed. Ten forty-five. I supposed I should get out of bed. Perhaps I could go and get a pedicure—I was already fed up with the Baby Bunting-coloured nail varnish I’d had applied three days ago at The Spa. Or maybe Naomi would be up for champagne and caviar at Jenson’s. I frowned and tried to remember if she was eating at the moment. I couldn’t be sure, but it was worth a try. I rolled onto my stomach and reached for my cell. There were two missed calls, one from my agent and one from my mother. I would sort them out tomorrow.

"Naomi, darling," I said when she answered on the first ring. "What are you doing today? Fancy some bubbles?" I flipped onto my back and stretched my legs up towards the ceiling, a combined inside leg of an impressive sixty-six inches.

"Tiffany, babe, I thought you would be here. It’s the Tiara event."

I sat upright and folded my legs. "What...today?"

"Yes, didn’t you speak to Rachel?"

I groaned. "No, I’ve been avoiding her. She’s crazy at the moment, too many hormones." My agent of four years was in the first few months of pregnancy and driving me nuts with her talk of babies. As if I would be interested in babies—if I didn’t have a perfectly flat stomach I would be out of a job.

"Well you ought to give her a call."

"Yeah, I guess I’ll brace myself."

"Come on, snap out of it. Where’s your spark gone? Enough moping already, get back out working, if not for the money then for your sanity."

Oh boy!!! Almost needed a cold shower after reading this one! Still nursing a broken heart after her boyfriend of two years leaves, needing 'a break,' Supermodel Tiffany takes on a job with a class...

Share what you thought about Orchestrating Manoeuvres and earn reward points.