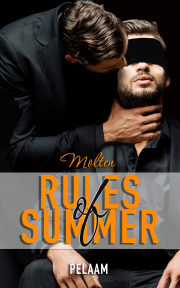 When it comes to fun in the sun, Steve and Jeff are burning hot.

Steve Anderson is a sommelier and the owner of a successful restaurant, although he prefers to keep that titbit to himself and a select circle of close friends. His orthopaedic surgeon husband Jeff is equally successful in his chosen profession. However, they play as hard as they work, and not only is Jeff a beloved husband, but he’s also a precious sub.

When they’re invited to a summer barbeque aboard a friend’s yacht, they don’t hesitate to accept. The theme is ‘a life on the ocean wave’, but Steve has very particular ideas about costumes…and the kind of fun they’ll have. For the couple, a pirate captain and his naïve captive will take on a whole new dimension for playing out a scene.

However, when someone tries to come between the Dom and his sub, they quickly learn their mistake, leaving Steve to show Jeff just who he belongs to.

As the last of the customers left and the door was closed and locked behind them, Steven Anderson sighed his relief. The restaurant had been full all night, to the point where his cancellation list had remained untouched.

The only blight on the evening had been a couple who’d appeared to have had a domestic disagreement. The man had come across as arrogant and self-centered from the moment they’d arrived, soaking up all the attention from other patrons. The woman had been much more reserved.

However, at one point, whatever she’d told the man had jolted him enough to pay her his full attention. What he’d said in return had made her break down and cry. She hadn’t made a scene. Steve had to give her that. She’d simply gotten up and walked to the ladies’ restroom.

Concerned for her, Steve had motioned for one of his waitstaff to go after her, and she’d left through the back door. Steve had made a point of fussing around the man, getting him another drink, and it had been a full fifteen minutes before he’d realized his companion wasn’t coming back. Steve smiled at the memory, then focused on his workers.

“Well done, everyone.” Steve waved to the servers still bustling around, making sure that all the tables were cleared and ready for the following day. “Well done,” he repeated. Steve nodded at his barman, who waved back, pausing as he cleaned down the counter.

Restaurant Comida was the flagship of his small empire of restaurants and cafes, and Steve ensured everything there ran like clockwork. He also recognized the contribution that an enthusiastic, dedicated and professional staff made. He strode quickly through to the kitchens.

The dishes were already in the washers, counters were clean and, while a few of the kitchen hands mopped the floors, the others were huddled, poring over notes of what was left over. They all looked up as Steve came in.

“Congratulations… Excellent!” Steve grinned as the staff grinned, slapped one another on the back and applauded themselves. “I heard nothing but praise for the food, its appearance and its delivery. Keep up the good work.”

“Are you looking forward to having next week off, Chief?” Rob asked, and Steve nodded at his head chef.

“Yep. One of us has a conference to attend, and the other will be checking out restaurants—in a purely professional capacity, of course.”

“Yeah, right.” Rob drawled the words, and everyone, including Steve, laughed.

“Hey, if I say it often enough, someone will believe me. See you all back here tomorrow.” Steve wasn’t leaving immediately. There was still paperwork to do, but there’d be no need to go back into the kitchen, especially since they were cleaning.

Settled at his desk in his office, Steve switched on his computer and glanced at the clock. I need to be out of here in an hour. No later.

On the stroke of sixty minutes later, Steve switched the computer off. There were still a few staffers finishing the cleaning in the restaurant itself and they let him out, locking the door behind him.

In his car, Steve finally started to relax. It had been a long, hard night at the restaurant, but he was home now…almost. He turned into a street which had an apartment block as well as residential houses. Steve drove into the underground car park.

He parked the car in its reserved slot and took the elevator up a single story. Exiting, Steve nodded at the concierge seated at the reception desk as he strode over to the elevator that led to the apartments.

The complex was manned around the clock and had its own private security. As luxury apartment complexes went, it suited him perfectly. Not only was it central to where he and his husband worked, but as their apartment was split-level, there was plenty of balcony space and they had beautiful sea views.

Five floors later, Steve entered the apartment itself. He walked straight through into the master bedroom. It was decorated with the same cream-and-chocolate theme that they’d chosen for their living area.

Carefully removing his clothing, Steve hung his suit in the walk-in wardrobe, and the rest of his clothing went straight into the laundry hamper. He sauntered through into the en-suite and took a hot shower. There was nothing he liked more than washing away the day’s grime. With the summer being so hot and sticky, there are occasions when I wish I could do this throughout the evening.

Once out of the shower, Steve briskly toweled himself dry then checked his watch. It was already four-thirty in the morning, and his husband’s shift ended at six. Steve grinned. That was more than time enough for him to change, drive out there and give him a surprise.

Steve selected black cut-offs and a black T-shirt, purposely free balling, then jogged up the stairs. He’d intended to go through into the kitchen but stopped to look at the painting that had pride-of-place on the wall in the lounge at the top of the stairs.

“We’ve come a long way, my love.” Steve smiled as he looked at the picture. The painting was so good that people thought it a photograph. It showed his husband Jeff seated in a large, chocolate-colored leather chair—the same chair that was in their front lounge. Steve stood behind him, his hands resting on Jeff’s shoulders in a pose that was as protective as it was possessive. Intentionally so.

Just two years after the painting had been commissioned, Jeff had qualified as an orthopedic consultant. He was a good one, too, respected and popular with staff and patients alike—and with a rosy future ahead of him. However, the work was hard, demanding and meant they spent time apart. It was for this reason that every moment they had together was precious, important and as luxurious as they could make it.

To make the apartment seem even bigger, the walls were cream-colored, and at each side, sliding glass doors led out onto balconies. One balcony overlooked the sea, and the other was more built-up and housed their barbeque. Although Steve was respected as a sommelier and worked front of house, he was also a trained chef. In the summer, he and Jeff ate outside as often as possible.

But at that moment, he wasn’t interested in cooking. He needed to create something that he and Jeff could eat before bed. The food needed to be light, filling and delicious. Within a few minutes, Steve had created platters of fruits, cheeses and prosciutto. He also ensured there was a fresh bottle of Prosecco chilling.

Share what you thought about Molten and earn reward points.