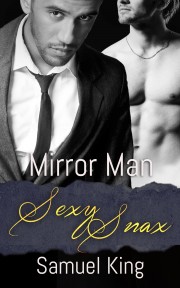 Alfie escapes to the Devon countryside, but his new home has a mystical past and he is soon caught up in a love triangle that takes him beyond the world he knows.

When Alfie moves to a Victorian cottage in the wilds of the Devon countryside, he’s looking for a fresh start and some solitude. However, soon after moving into his new home, he begins to have vivid dreams about a stunningly handsome stranger, who appears to be trapped inside an antique mirror that hangs on the wall in the living room.

To add to his confusion, Alfie is also visited by his young landlord, who seems to know more about the man in the mirror than he wants to reveal.

Alfie finds himself torn between two men, one who seems like perfect boyfriend material, the other a mystical force of nature, desperate to be freed from his magical prison.

Reader advisory: This book contains a scene of public sex and allusions to sexual assault.

Alfie had always dreamed of living in a house set in its own woods. In his fantasies, the house would have a tower and the woods would be expansive, sweeping down a hillside to a small village where he would buy organic vegetables from a little independent shop. But sometimes dreams required compromise, and walking through the densely packed silver birch trees toward the third house on their agenda that day, he thought this could just be that time.

“I really like it,” he whispered to Tom, who strode purposefully beside him, eyeing Ashley, the enthusiastic estate agent who was a few paces ahead of them. Alfie followed Tom’s gaze. It seemed to be focusing on Ashley’s arse. Alfie could see the appeal of the small but perfectly formed butt, attractively presented in blue suit trousers, but he wished that, today of all days, Tom could resist temptation. This was supposed to be their new start, after all.

Ashley was fumbling with a set of keys, great clunking things hanging from a solid metal ring. Alfie loved that these were the keys to their new home—their possible new home.

“You haven’t even seen it yet,” said Tom.

“I’ve seen the pictures,” Alfie replied, cold from an earlier downpour of rain but still flushed with excitement.

“Look! It’s beautiful.” Alfie nodded to the cottage, which had sprung into view as they’d crested the shallow slope of the mulchy pathway that wound through the copse of trees.

Ashley turned, boyish face beaming, his own neatly cut dark hair shining with rain. “It is special, isn’t it?” he said.

Tom flashed Alfie a warning glance that said, Don’t let an estate agent know you like a house before you’ve even been inside. He’ll use it against us!

Alfie didn’t care. He grinned as they approached the Victorian cottage, which had an entrance that was like something from a chapel—red bricks formed an archway, topped by a winged gargoyle that pointed a tiny clawed finger at them as they neared the front door. Perfect.

“Have we just walked into a Hammer horror film?” asked Tom, not bothering to whisper now.

“Wouldn’t that be great?” laughed Alfie, quickening his pace so that he was standing next to Ashley as the agent tried the first of five keys in the lock to the front door.

“So, this is the entrance hall,” chirped Ashley.

“Really?” said Tom. “An entrance hall inside the front door. What other surprises do you have for us, Ash?”

It was hardly a hall, just a square space with well-trodden tiles on the floor. Wooden panels enclosed the area, with doors to their left and right and a row of coat hooks fixed to the wall that faced them. Alfie reached out and fondled one of the hooks as if it were something phallic.

Ashley coughed. “Shall we go left or right?” he asked.

Alfie bit his lower lip, looking at each closed door in turn. “Left,” he said, already grabbing the lever handle and pushing down.

The door opened onto a living room that was dominated by a huge chimney breast and a fireplace almost big enough to sit in. Above the brick mantelpiece hung an ostentatious gold-framed mirror, the glass liver-spotted and murky.

Alfie went straight to it. As he inspected the ancient piece, he caught sight of Tom’s cynical expression in the reflection, distorted by grime and the fifteen or so feet from mirror to door, but still clearly scornful. It was a look that suited his hard, slightly crooked features. His wide, full-lipped mouth had been made to sneer. Alfie studied his own reflection for a moment too, noticing the fine lines around his gray eyes. He looked older than twenty-six, he thought. He was sure those lines hadn’t been there six months ago, before he’d caught Tom in bed with another man. That was not the first person he’d cheated on Alfie with, he’d come to learn.

“Is this staying?” asked Alfie, nodding at the mirror.

“It can, I’m sure,” said Ashley, who had moved to the French windows that offered a view across the rear garden. “In fact, yes, I’m sure it can. All the furniture comes with the house.”

“Oh good,” said Alfie, now bending to peer up the chimney. “Does this work?” His voice echoed, as did the laugh that followed. He knew he was being too keen and over-excited, but it wasn’t as if they were planning to buy the place. They were only renting for a year—assuming their relationship lasted that long. Alfie wasn’t sure that even a new start in his dream home in Devon would be enough to salvage things, but he was willing to give it a go. When he straightened up, he eyed Tom’s reflection again. His boyfriend’s gaze was fixed on Ashley’s butt once more.

The remainder of the viewing continued to feed Alfie’s glee—more wood paneling, exposed beams in every bedroom, a bathtub on clawed feet and a spiral staircase leading to a spacious attic, which was dripping in spider webs.

Alfie heard Tom and Ashley descend the spiral staircase while he continued to survey the attic. It would be the perfect workspace. Where better than a dusty attic room to write blogs and features about horror films?

It was Ashley’s voice, and he sounded both shocked and upset. Alfie clattered down the spiral stairs to the landing. Ashley and Tom were standing several feet apart, and the young estate agent was red with what could have been embarrassment or anger. Tom was holding up both his hands in front of him, as if to calm a spooked animal.

“What’s going on?” asked Alfie, although he already knew. They hadn’t even moved into the house and Tom was already up to his old tricks.

“Are you okay?” he asked Ashley.

“Yeah.” The estate agent straightened his tie and headed toward the stairs. “I’ll be outside if you need anything.”

Alfie turned to face Tom, who had the cheek to meet his gaze without shame.

“Really, Tom? The estate agent? He’s about twenty. He’s not even gay. He lives with his girlfriend.”

“I didn’t do anything!” insisted Tom. “I just accidently brushed my hand against his arse. He’s overreacting.”

“Come on, Tom,” said Alfie. “Let’s not do this. I let you treat me like an idiot before, but I’m not going to make a habit of it. You obviously don’t want to be with me, so why are we pretending you do? I love this house. Let this be my new start. You can have a new start somewhere else with whomever you want.”

“Alfie…” Tom made to grab hold of his hand, but Alfie snatched it away.

“I’ll see you outside,” said Alfie. “I’m going to take one last look around before I tell Ashley that I want the house—assuming you haven’t frightened him away.”

Samuel King is London born and bred, and spent his twenties and thirties hanging out on the London gay scene, mixing with some true characters and even finding romance on a few occasions. Now more likely to be found eating in a nice restaurant on a Saturday night than clubbing, he also enjoys reading across many genres, watching films—especially old horror films and romantic comedies.

Share what you thought about Mirror Man and earn reward points.