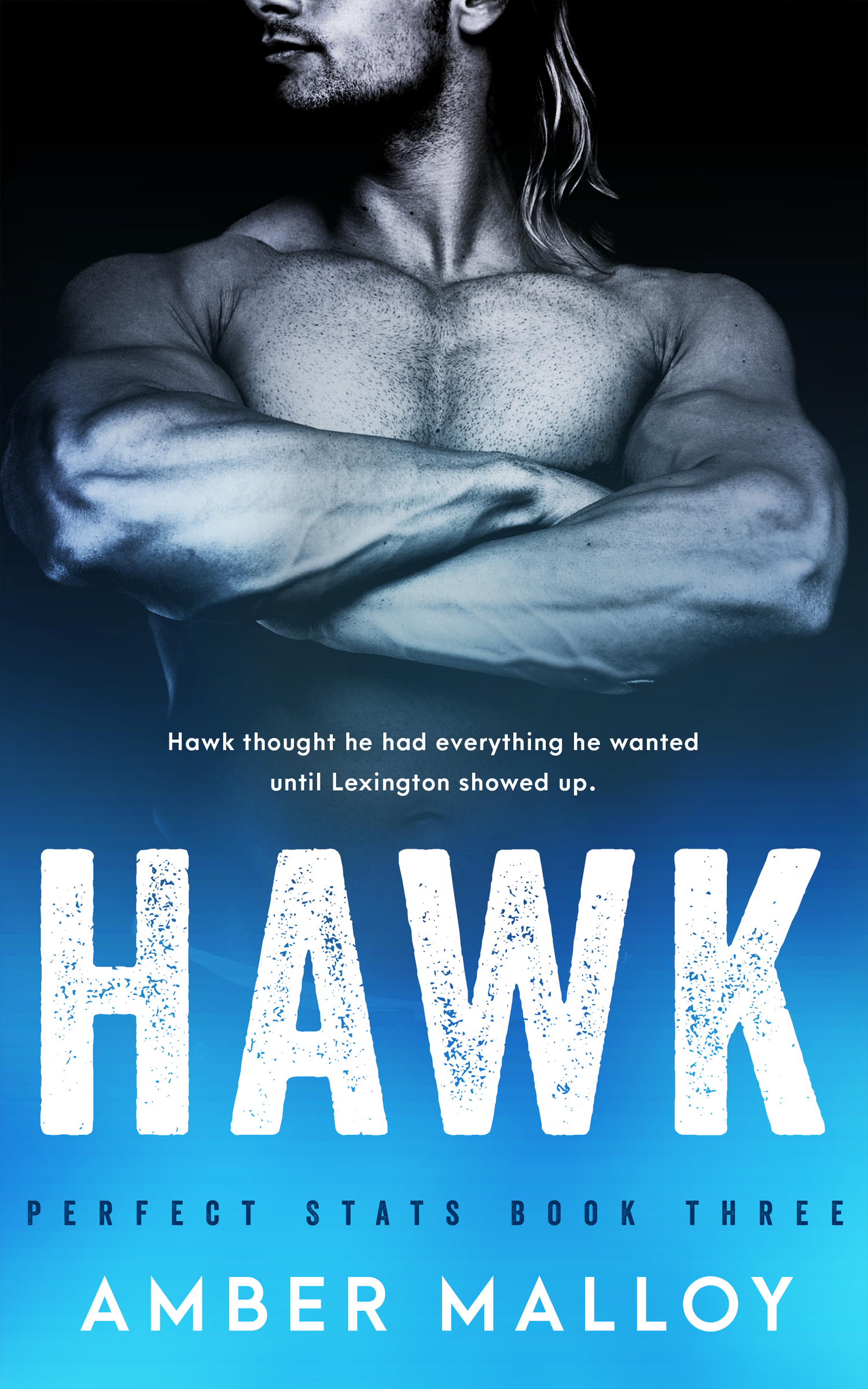 Book 3 in the Perfect Stats series

Hawk thought he had everything he wanted until Lexington Waters showed up. That’s when he discovered he needed so much more.

Tech Guru Lexi Waters needs to snatch her company out of the grasp of her greedy ex-husband. The only problem is the restraining order that keeps her away from the business she built from the ground up. With no money left to her name, Lexi is forced to go back to Chicago and face the first man to ever let her down—blues legend Sugarfoot Moe Waters, her father. While she’s stuck fixing up his crappy bar, the last thing she needs to deal with is a pushy, arrogant professional hockey player—Hawthorne Maze, aka Hawk. Hopefully the gorgeous distraction won’t derail everything she has worked so hard for.

From the outside looking in, Hawk’s life seems perfect. Professionally, he’s at the top of his field, and personally, he has his pick of any groupie. Orphaned by teenage parents, he only knows is that his mom is white and his dad black. Other than that, there are only two people he considers family—his childhood friend Gavin Knox and geriatric bar owner Moe. He thinks he knows everything about the famous blues artist, but the sudden appearance of his hot-ass daughter is not only unexpected but also unwanted. Contemplating retirement, Hawk needs to figure out what to do next, but fate keeps throwing the sexy egghead Lexi in his path.

As Lexi Waters’ advanced coding class put the finishing touches on their latest assignment, she flew her fingers across the screen of her phone a million miles per hour. Drowning out the click clack sound from more than a dozen girls pounding away on their keyboards, she polished off her last text.

“Okay, girls!” she hollered over the noise while pushing away from her desk. “We’ve got fifteen minutes left, but I wanted to say…uh—” Flashing lights drew her attention toward the window. A police cruiser turned into the community center’s parking lot. Shit! Standing up, she slid her phone into the back pocket of her jeans before she stepped in front of her students.

“Girls, code has been one of the biggest joys in my life, and you guys will never know how much you truly mean to me…” Lexi took in each one of the girls’ faces, wanting to commit every detail to memory. “I’ll be taking a little time away, which means I won’t be able to teach the class.” Groans filled the room at her announcement. Lexi had been with some of these girls since their tween years.

Do not cry. Do not cry. Swallowing the emerging lump in her throat, she encouraged herself to keep it together for a smidge longer.

“Miss Tracy will be taking over for the foreseeable future.” Lexi steadily ignored her phone buzzing in her back pocket. “She will help you tie up the loose ends on your video game concepts, starting with the plot all the way down to character development.”

“But we wanted to do it with you,” the best coder in the group whined.

Limited on time, Lexi refused to acknowledge the little feud that had been brewing between them for weeks.

“Trust me. You guys are in good hands. You’re all set for the Fire Code submissions, and… Well”—she took a deep breath because goodbyes were always hard—“every single one of you is intelligent, awesome and there’s nothing you can’t and won’t do. Now make me proud!” She pounded her fist in the air with more enthusiasm than she actually felt.

Chairs scraped against the tile floor, the sounds bouncing off the concrete walls as the girls unexpectedly rushed her. Lexi stumbled back from the weight of their enormous group hug. For a moment, she allowed herself to open up, and lowering her head on top of her students, she soaked up all the good feels.

“Ms. Lexi.” The smallest in the class reached up and pulled something out of the messy bun piled on top of her head. “You have glass in your hair.”

“Oh?” She took the chunk out of the girl’s hand. “Mirror broke.” With assistance from her soon-to-be-ex-husband’s golf club—she had smashed it into a million pieces. She was snatched out of the warm comfort of her hugs when the community center secretary waved from the small window in the door. “Okay, time to go. Take care, girls.”

Determined to not get emotional, Lexi slipped away from the girls’ surprisingly strong grips. Grabbing the doorknob to open the door, she turned back to wave goodbye, leaving her home away from home.

“Waters,” Lexi corrected the nervous woman. She needed to distance herself from her ex-husband’s name ASAP.

Flinging the piece of mirror into the janitor’s cart on her way past, Lexi tuned the woman out. Josh had always loved her hair long, but the weight of her curls had grown into a burden. Lexi couldn’t wait to change it. She had narrowed down the haircut she wanted to either a symmetrical chic or a perfect Toni Braxton à la Betty Boop pixie cut.

“Ms. Stewart!” a couple of boys on the basketball court yelled.

She waved at the teens, fighting off the mist in her eyes. The kids were about the only thing she wished she could take with her.

“The officers wouldn’t tell me what they wanted to talk to you about,” she nervously babbled, “but I put them near the back door like you suggested.”

“Did you get the numbers that I sent you?”

As they walked through the corridors of the enormous Inglewood Center, the secretary fumbled with her phone. It took every ounce of Lexi’s patience not to snatch it from her hands. “Moe’s Blues and Jazz, Sugarfoot Moe Waters and or Simone, the manager of the club, correct?”

“And forgive me for being obtuse, but why did you send me these numbers?”

“Bail money.” She walked into the administrator’s front office. Thankfully, there was an exit away from the classroom, where none of the kids could witness their mentor’s arrest. #superembarrassing. “If you would be so kind as to call them and let them know that I will need to be bailed out, that would be awesome.”

“The asshole I will soon be divorced from froze all my assets.” She shrugged. “So, yeah, there’s that.”

“Waters,” she corrected the cop. All she’d done was smash every breakable item in Josh’s secret hideaway. Considering it was her hard work that had paid for that crap, it technically shouldn’t have been a jail-able offense.

“Lexington Waters, you have the right to remain silent.” The stocky officer who demonstrated a severe case of Napoleon complex grabbed her arm a little too harshly and handcuffed her.

For a minute, it crossed her mind to feign innocence, but she was super guilty, because…

Mold. The courthouse actually smelled worse than fungus, but Lexi had finally put her finger on the suffocating stench.

Avoiding eye contact with the bailiff, she waited for him to relieve her of the intrusive ankle monitor she had named ’Roach’. No one liked a roach unless a joint was on the other end of it. The device was listed in the ‘wouldn’t miss’ category she had made, a lot like the state of California or her ex-husband. In less than two hours she would be on a plane to Chicago, two thousand and fifteen miles away from the mess that had become her life.

“Good to go, ma’am. I bet you’re happy to get that off.” Lexi had intentionally worn high heels and a skirt for this celebratory moment. Feeling lighter but not necessarily better, she eyed the bailiff without allowing him any indication that she needed to chat. He may have wanted to extend a bit of levity to a crap situation, but chit-chat was never her thing.

“Ms. Stewart.” She lifted her eyes away from the angry welt the monitor had made and toward her attorney.

“Waters… The last name is Waters.” Lexi bent over to rub her ankle.

“Let’s go over the terms of your probation,” Maureen Wendt said.

“Uh, didn’t we already do that?” she asked her no-nonsense lawyer.

“Yes, but I want to make sure you fully understand.”

At the age of twenty, Lexi had built her own company from the ground up. Of course, everyone thought Josh was the man behind the firm and not her because Fuck Josh. That’s why! Before SugarTech had made major strides, Wired Magazine had declared it the most promising firm since Macintosh.

Fast forward to twelve years later and her ex-husband had decided to snatch the rug out from under her…literally. The fucker even took her rug.

Wanting to get the whole thing over with, she nodded.

“A distance of one hundred yards must be maintained between you and the company’s campus.”

Maureen shot her a glare before she continued. “Effective immediately, you must vacate your position in the company. Your seat on the board will be in question until a judgment has been rendered on the charges that were levied against you.”

“Hold on. I thought my criminal charges were dropped.” Lexi ran her hand across her fresh pixie cut. In ye olde tradition of pissed bitch, she had whacked most of her hair off.

“That was for the case with your ex-husband. Remember that the board members have levied their own criminal charges and a civil suit against you.” Maureen heaved a considerably frustrated sigh in her direction. “We’re still working to get those charges dismissed.” She checked her phone as she continued to reel off a long list of transgressions. “Until then, the conditions of your bail will have to stay in place.”

Grabbing her purse, Lexi stood. Maureen was seriously testing the boundaries of the little bit of patience she had left.

“This may not be the outcome we hoped for, but it’s the best we’re going to get under the circumstances. Perhaps next time you’ll control your temper and not break into your ex’s house to childishly destroy all his belongings.”

“Considering it was my money, I technically destroyed my own shit.”

“According to California law—”

In the past, she’d been accused of not expressing herself very well. Since her world had been flipped upside down, Lexi had communicated her emotions a tad differently. She pushed open the revolving door and stepped away from Maureen mid-sentence, leaving the lawyer—and soon California—behind her.

Share what you thought about Hawk PRINT and earn reward points.