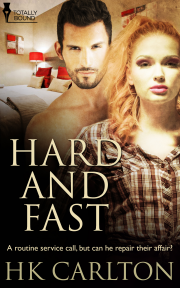 She’s looking for a forever kind of thing, not just some meaningless fling.

Josslynn Rossdale has dedicated the last ten years of her life making her sister’s dreams come true, and happily so. But now that Pasha is on the cusp of taking the fashion world by storm, Joss realises she needs some time apart from Pash to find her own direction. Temporarily breaking away from the fast-paced modelling industry, Joss returns to their hometown and decides that opening her own agency is the way to go.

An overly hot and humid summer season has kept repairman Billy Maas more than busy. But when he attends a routine service call, he doesn’t expect the most beautiful woman in the universe to answer the door, let alone allow him to service more than just her air-con unit.

But Joss isn’t looking for a simple fling. After seeing how happy her sister, Pasha, is with her husband, Lot, she wants some of that. Billy is fun and exciting, but their lives and interests are very different. So when Joss begins to have real feelings for the adorable Billy, she sees no alternative but to distance herself from the younger party boy—leaving the bewildered and lovelorn repairman with a crisis he can’t fix.

Josslynn Rossdale stood in line at the bank. Another scorching day with the humidity so high that one perspired just standing still. Most of the other customers appeared to be melting, each with that fine layer of sheen and flushed complexion. In a lightweight cotton blouse, beige short shorts and sandals, Joss attempted to beat the heat.

“Next,” the first vacant teller drawled.

“Hey, Joss, how are you?” She’d been in the savings and loan so often lately that the employees knew her by name.

“It’s so much better in here now that they’ve got the air conditioning back up and running.”

Joss noted the serviceman in the standard blue work shirt, placing his tools back into his box. “Mmm, should suggest him for my building. AC’s on the fritz at my apartment too. I put in a call to the building manager but I’m still waiting.”

The repairman was tall, with short dark hair and nice broad shoulders. Snug, navy workpants showcased his well-toned glutes. As if he knew that he was being scrutinised he turned and zeroed right in on Joss. He had the most piercing blue eyes. Too cute, and too young. He couldn’t be more than twenty-five, she guessed. Somewhat used to a certain amount of healthy male attention herself, she smiled, totally aware that he was checking her out too. He grinned in return and the action brought out a charming dimple in his left cheek. He sported a fine layer of stubble as if he hadn’t had time to shave that morning. Joss liked it. It gave him a rugged appearance. Yes, he was a very attractive guy.

“What can I help you with, Joss?” Tracey snagged Joss’ attention back. “He’s really freakin’ hawt, right?” Tracey said under her breath, just as the young workman set down his toolbox on the countertop next to her workspace.

“Actually, I was hoping to catch Tom,” Joss answered. “I’m not sure if he’s in, but he said he’d leave some paperwork for me at the customer service wicket. But your man Tech-Co here is using it to store his tools at the moment.” Joss read the company name off the guy’s shirt.

“Sorry, I didn’t mean to interrupt. I just need a signature and then I can get out of the way.” He said this to Tracey but kept his gaze trained on Joss, grinning, the corner of his mouth curling adorably.

“I’ll get the manager. I’m not taking responsibility for anything,” Tracey scoffed, leaving her post.

He peered directly into her eyes. She liked it but it was also a little disarming.

“I hear it’s supposed to be this way all weekend,” he added.

His lips were nicely shaped, the bottom one nice and full.

“I guess I shouldn’t complain. It keeps me busy.”

On even closer examination, under that dark and grainy stubble was a slight cleft. Joss was a sucker for a man with a dent in his chin.

“Here we go. The manager is on the way,” Tracey said to the repairman. “And, Joss, here’s the portfolio Tom put together for you to go over.”

“Thanks, Tracey. I’ll probably see you again in the next week then.”

Joss glanced back at TD&H. “Have a good day then,” she said lamely.

“Yeah, you too.” He nodded as the manager joined him.

Joss began to walk out when one of the other financial managers stopped her to make sure she’d been waited on. She assured him that she had, thanked him kindly then continued to the exit, arriving as the rugged repairman did. It just so happened his hands were full—toolbox in one and a ladder in the other. Joss held the first door open for him.

“Well, thank you,” he said with a wide smile. He had excellent teeth too.

Joss rushed ahead and opened the second door.

“Thanks again.” He squinted up at the sky. “Whoa, it is hot out here. Being in there, in the cool, makes you forget for a while.”

“I know. It’s nasty, isn’t it?” Joss let the door swing closed and she turned in the direction of her car.

“Take care,” he said then continued on his way.

For shits, Joss peeked over her shoulder, and to her delight, he was doing the same thing. How sad had her life become that she was now thrilled by such a little thing?

Share what you thought about Hard and Fast and earn reward points.