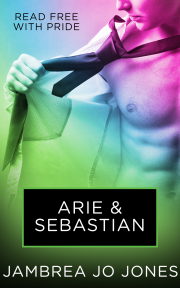 Arie and Sebastian do Halloween. Getting tipsy at Cinders party isn't the best idea Arie's ever had, but he's never been know to hold back and he isn't about to let a house full of people stop him for getting his man.

I loved this book! It was really sweet.

Share what you thought about Halloween Fancy: Arie & Sebastian and earn reward points.