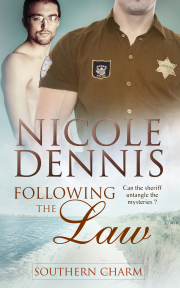 Book 5 in the Southern Charm series

Can a sheriff untangle the mysteries invading his town and those which surround the local IT geek who’s captured his attention?

Sheriff Robin Burke is pissed off. His quiet seaside town is troubled with all kinds of problems. Looking for the man who tried to poison Samuel Ashford is high on his priority list, but there is more in store. When someone he crushes on returns, he hopes to ignite his non-existent love life.

Returning from London, Beau Courtenay discovers his home has been invaded by his troubled half-brother. Dealing with the chaos, he is busy with a massive backlog of work and renovating the entire Southern Charm system. He finds another troubling detail in the form of random USB interfaces around Shore Breeze that don’t belong there. And there’s also the allure of the sheriff distracting him and threatening to reveal his darkest secret.

What will happen when Robin connects his suspect to the handsome IT geek with the delicious British accent and tight ass? Can Beau help the sheriff follow the law to prosecute anyone who dares to attack their beloved town?

Reader advisory: This book contains the use of homophobic language.

What was he missing? Why couldn’t he solve what should be a simple crime committed within his small town?

Sheriff Robin Burke shuffled papers around to look at things a different way, but nothing worked. He couldn’t figure out the pattern. He banged a fist on the desk in frustration.

How could someone commit such a heinous crime and not leave a damn trace? It annoyed the living hell out of Robin. Why would someone want to attack a newcomer to Shore Breeze who wanted to make things better? Samuel Ashford had arrived in town to assist in the rebuilding of the town’s beloved B&B, the Southern Charm. Someone disliked his presence in the Charm without giving him a chance.

Even the Southern Charm’s co-owner and brilliant chef, Dakota Mitchell, had taken some time to adjust to the change, but eventually had come around. To everyone’s surprise, Dakota had even fallen hard for the newcomer. Robin had enjoyed watching Dakota stumble head over heels as he’d chased Samuel.

Somehow the attack on Samuel had brought him and Dakota closer. Robin heard they were making plans for a future together. Shore Breeze had gained another permanent citizen from a tourist.

As the weeks passed after the incident, Robin knew he lost valuable time as leads went cold. Any detective with a case knew the first forty-eight hours were crucial. His clock had stopped a long time ago, but damn if he would give up and put the case away. He wouldn’t let it go cold.

Leaning back in his old creaky leather chair, Robin laced his fingers behind his head and stared out of the window, going over the facts. The case puzzled him.

Someone had known Samuel was allergic to any type or form of nuts. The allergy could be deadly if he ingested a high enough amount or didn’t get medical help in time. Samuel had mentioned the potential threat to Dakota, who knew how to contain it within the kitchen. Once he’d learned of Samuel’s allergy, Dakota had taken all the necessary steps to prevent anyone being hurt. Somehow, someone had managed to lace a pitcher of iced sun tea, the Charm’s famous brew and Samuel’s favorite drink, with almond oil or essence. Either way, the moment Samuel had drunk a glass, his breathing passages had swelled and closed. It was pure luck he’d been in a meeting with Sully Tarleton and Dakota had been within shouting distance. The combination of the two men’s immediate actions had helped Samuel to survive the near fatal attack.

“Boss, you’re going to explode if you keep this up,” his assistant, Clara, said.

“I never had this much trouble with a damn case. All I have are circumstantial pieces. Pieces I can’t link together or use to locate a definite suspect. The one guy I need to find has disappeared. I hate going to the Charm, looking at those two fellas and telling them I have nothing like a stupid, incompetent backwoods idiot.”

“You’re anything but an idiot, boss,” Clara said. “Give me a minute. I think I have something which can help.”

Lowering his hands, Robin looked at the door as Clara disappeared. He watched her reappear with two of the younger officers. They unrolled and hung a piece of corkboard on his free wall. Another officer secured an oversized whiteboard next to it.

“Thanks, boys,” Clara said as she dropped a box on Robin’s desk. “Tony, get the other stack for me.”

Robin leaned forward and looked at what they were doing to his office. “What’s all of this? It’s more clutter.”

Robin pulled the box across his desk and stared at it. There were containers of pushpins, markers, erasers, a length of ribbon, highlighters, and who knew what else Clara had found. He looked up as Tony carried another stack of items and set them on his desk.

“Correct, thanks for remembering,” Robin said.

With a nod, the rookie left to get the coffee.

“He’s working out. Getting his feet underneath him.” Clara tapped the box and papers with one hand. “No more procrastination. Get to work, boss. You have a bad guy to catch.”

“Thanks, Clara, can always count on you for a kick in the ass.”

He pushed away from the chair then walked around and leaned against the corner of the desk. He contemplated what he was about to attempt.

“Sir, I have your coffee.” Tony knocked on the doorframe, carried in the steaming mug then set it on the desk. He clasped his hands behind his back and studied the empty boards. “Do you need some help?”

Robin glanced at the younger officer. “Do you know how to create a case board?”

Robin narrowed his gaze at the wet-behind-the-ears rookie. “It’s been a little longer for me.”

Clearing his throat to cover a chuckle, Tony proceeded to give Robin a lesson in creating a board and timeline.

Robin discovered the board’s usefulness as it expanded with every additional piece of information. They used the ribbon to create a small timeline of what had happened. Several markers indicated points of interest. He wrote a list of employees on one side.

Robin placed Allan Daniell’s name on top. He circled it.

“Is this the main guy you’re looking at?” Tony asked.

“He’s been the most consistent name popping up when I speak to others around the Charm. He was seen there the day of the poisoning—”

“Simplicity in explanation for the moment.”

“Not much is known about where he was or is.” Robin sipped at the fresh cup of coffee. “I first heard the name from Ashford and Dakota. Malcolm Bissette confirmed Daniell was in the kitchen when Ashford mentioned his severe nut allergy.”

“Why would Daniell be in the kitchen? According to the file, he’s a waiter and supposed to help with the set-up. The restaurant wasn’t opened to diners.”

“Correct. I confirmed his position within the restaurant with Cecile, the hostess. It was before the dinner service started and he was there to help, but he wasn’t doing much other than following Dakota. Cecile mentioned his strange fascination and lust for Dakota.”

“Must be a bit awkward.”

“Very. He wasn’t hiding his attraction.” Robin picked up a folder and flipped to one of the statements. “It seems Daniell returned to the restaurant after several months away. He mentioned he was going to school, but I haven’t found a record of him attending class. At least within the four surrounding counties.”

“I’m trying to figure it out.”

“Where was he when the actual incident took place?”

“According to the schedule, he wasn’t at the restaurant, but Daniell knew enough about the operations to slip in, find the vial and coat the pitcher. Since he was there when Ashford mentioned his allergen, we could have Daniell on intent.”

Tony pointed to another name off to the side—Beauregard Courtenay. “This is the owner of the local IT company, Courtenay Tech. Why is Beau there?”

Robin picked up a couple of pages from his desk to show Tony. “Five years before this happened, Daniell’s address was the same as Courtenay’s. Courtenay was his guardian. They’re connected, perhaps family. I’ve never had a problem with Courtenay. He’s one of best IT techs.” There was another reason Robin didn’t want Beau involved, but that was personal and hidden deep inside him.

Dreamy…Sensual…Forever Love
A quiet one, Nicole Dennis is the penname of an asexual author of different genres of fiction – both LGBT+ and hetero. Lots of characters, worlds, and stories build up in her head until she must get them down on the screen – anything from romance to fantasy to paranormal.

During the day, she works in a quiet office in Central Florida, where she makes her home, and enjoys the down time to slip into her imagination. She is owned by a new feline companion – a house panther, affectionately known as Brat Cat.

The suspense from the other books in the series does carry over to this one. Dennis does a great job at keeping the interest and drama going and kept me turning the pages. Overall, I really lo...

This was such a good story. This is the first book in the series I’ve read and I wasn’t confused or lost in any part. I loved the setting and how all of the people in the town are conn...

Share what you thought about Following the Law PRINT and earn reward points.

Other books in the Southern Charm seriesView Series Page