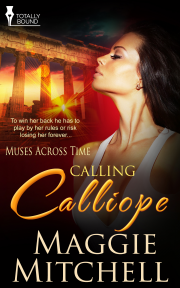 Book 2 in the Muses Across Time series

Can love survive across time and space?

Found wandering the streets of Melbourne, Callie has no memory of who she is. She’s taken in by a social worker at a women’s shelter and soon becomes an integral part of the team, where she helps battered women and their children move on with their lives.

When a larger than life man appears, claiming he’s her husband, she immediately assumes they’re not together for a reason.

But a violent criminal is angry with her for keeping his family away from him and plots revenge, so keeping this giant of a man around seems like it might be a good idea after all.

Gus might be a king in his own land, but this strange place is a different story. It took him six months to find his beloved Calliope and he is not leaving without her. Even if she can’t remember him. Now that she’s in danger, the need to rescue her is greater, but the stubborn woman won’t believe him. To win her back he has to play it by her rules, or risk losing her forever.

One more family settled in to a new life. Callie smiled when she closed the car door and strapped on her seat belt. They were her family—these abused and battered women and their children. Brave families who were courageous enough to start again. She loved each and every one of them. Even the hard cases who couldn’t quite grasp the concept that perfect strangers were helping them and not expecting something in return. Eventually they came around, once they felt the love and acceptance. Just like she had.

Callie had a particular soft spot for the children. Kids were so resilient and they adjusted to the changes a lot faster than their mothers. Being in a safe place would do that.

She watched as Mardi, her best friend, and the manager of the women’s shelter where she lived, climbed into the driver’s seat and turned the key in the ignition. In looks they were as different as night and day, Callie with her brown eyes and long dark curls, and Mardi with her baby blues and short blonde bob, but they both cared deeply for the battered women and children they helped.

Callie grinned. “All safe and sound. Jenny and her daughter are both tucked up in bed in their new home.”

“No one followed you?”

“No, we changed trains twice. We went from here to the southern suburbs before finally getting to their house in Ringwood. No one could have followed us all that way!”

“That might have been a bit over the top, but at least we can be sure they’re safe. How did Amy like the playground across the road?”

”She loved it. Jenny promised to take her first thing in the morning.”

“That’s great. You did a fantastic job with that family, Callie. I’m so glad you’re here with us.”

Callie reached over and wrapped her arms around her friend, giving her a big hug. “I love being with you, and trust me, I get more out of it than they do.” She drew back a little and frowned. “It’s not like I have anywhere else to be.”

Her friend hugged her back. “I have a feeling the universe sent you to us for a reason Callie, and I’m so glad you’re here.” Mardi gave her a mock punch to the bicep. “You’re a bit quirky, but we love you for it.”

Callie snorted as she broke contact. “Oh, for goddess sake, I’m no different to anyone else.”

“What are you talking about?”

“You’re always saying things like oh my goddess, or Zeus help us. I’ve never met anyone like you, and I’m sure I never will again.”

Callie laughed. “I’d like to think I’m unique, but I’m sure I’m not the only one who talks that way.”

“I suppose that’s possible,” said Mardi. “But I do worry that when your memory comes back we will lose you.”

Callie sighed. “It hasn’t shown any signs of returning for six months, so I’m not sure it will.” She clasped her friend’s hand. “But know this—even if I do remember, I promise you I’ll always be here to help you and the families.”

“Mardi, look at me,” she said, tightening her grip. “I always keep my promises. I might not know much about myself, but my heart tells me this is the truth.”

Her friend didn’t seem convinced. “Just know that if you have another life to go back to, we will be happy for you.”

The mobile phone rang and Mardi loosened her hands to answer it quickly, her face mirroring Callie’s concern.

“No problem, we have a spare room right now,” said Mardi into the phone. “Where are you? I’ll come and get you.” She grabbed a pen and paper from the dashboard and started writing. “Uh-huh…yep. Got it, see you in about fifteen minutes,” she said, ripping the paper off the pad then tossed it to Callie. “And don’t worry, honey, you’ll be safe with us.”

Mardi threw the gear stick into reverse before backing out of the driveway.

Callie keyed the address into the GPS. “Just the one?”

“There’s a booster seat in the back that Amy used.”

“Hopefully it will be fine. If not, we might have to break the law again.”

“That’s never been a problem for you before.”

Mardi shrugged. “This is true.”

“Good thing your boyfriend’s a policeman.”

“Yep. It helps when we need to push the boundaries a little.”

Mardi whistled along to it as she drove, a little nervous habit she had which amused Callie no end.

“What? Are you laughing at me?”

Callie tried but failed to stop herself from smiling. “I wouldn’t dream of it.”

“Just be thankful I’m not singing.”

Luckily the GPS kept reasonably silent for the rest of the trip, while the pair prepared themselves for what they would find when they got there.

Maggie Mitchell lives in her dream place by the sea. Of course, sometimes she even gets the dreams written down in a story. Lucky for her she has a musician for a husband who understands the creative spirit.

In her other life she teaches undergraduate university nursing students and designs eLearning courses for health organisations.

Most days you'll find her out on her balcony enjoying a glass of Moscato or a cappuccino made on her beloved espresso machine.

This story is a hot and sexy adventure across time and one not to be missed. I am very much looking forward to the next one in the series.

A fast, fun reead, if you have a short time to fill and enjoy reading steamy romantic stories based on mythology. For its witty humor and skilled use of mythical tropes.

Share what you thought about Calling Calliope and earn reward points.

Calling Calliope is the featured book for November 2014, for the Australian Romance Readers Assocation!

Other books in the Muses Across Time seriesView Series Page