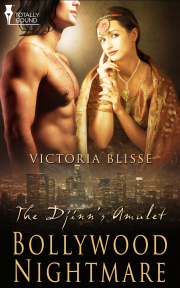 Book 2 in the Djin's Amulet series

Sometimes what seems to be a nightmare can change into a dream come true.

Kiya is the daughter of Rahul Khan, the biggest Bollywood star of all time and she is a talented actress in her own right. Her abundant curves have taken Bollywood by storm and now Hollywood is knocking at her door.

Johnny is the Khan family Djinn. He is responsible for Rahul meeting his true love Laura. Well, that's what he tells people anyway. His Masters latest wish is the safekeeping of his daughter Kiya on her American adventure. How he ends up powerless and alone he's not quite sure and how he's going to rescue the kidnapped Kiya without his Djinn magic is a mystery.

Luckily, Kiya has many talents She sets about seducing her captor, Aseem but it isn't just her virginity he takes, it's her heart.

Will Kiya and Aseem beat the odds, escape the badlands warehouse and have all the wild, kinky sexy they long for? Will Johnny be wished free, will he go to his soul mate in Djinnistan and will they all live happily ever after?

Reader Advisory: This book contains contains a scene of dubious consent, some hot spanking, sexy bondage and a sarcastic Djinn you are going to fall in love with.

So yes, Rahul and Laura married. It was almost a fairy tale. He worked in the movies and she became the translator she'd always dreamed of being. They were disgustingly happy and content and I had high hopes that Rahul would finally wish me free. Then one evening as he supped cold beer in the stifling heat of midsummer I asked him about it.

"So, you've got everything you ever wanted, right?"

"Yes," he replied, lazily wiping sweat from his brow with the back of a hand.

"And you're in love and so very happy, right?"

"Oh, yeah." He still got that dewy-eyed possessed look every time he thought of Laura. Sickening.

"Then you don't really need me anymore, right?"

"Come on, Rahul. You have true love and we Djinns can't even grant that wish, nuh-uh, but I did, didn't I? I got you married to your true love."

"Your ego has no bounds, Johnny. Yes, no doubt you helped and I thank you for it but the true love came about naturally despite the odds."

"Oh blah, blah, blah. Whatever. I thought you were going to wish me free when you were happy and settled and all that crap."

"Yes, I was going to but something has happened recently to change my mind."

"What's happened? Has Laura come to her senses and shagged someone hunkier and richer than you?"

"Now you're just being petulant. No, Laura has not. She has, however, given me some good news."

"She's returning to England and she's taking her Britpop CD's home with her?"

"No, Johnny. Just listen for a minute, would you? Laura is pregnant."

"Is that all you have to say? Geez. I thought you were meant to be the eloquent one."

"Congratulations on the imminent birth of your little crying bratling. Here's to sleepless nights, smelly nappies and toddler tantrums."

I disappeared then into my little tea kettle. No puff of smoke, no drama. Just a fully grown man shrinking and slipping down the spout of a tall, Eastern-looking brass kettle. It might not be much but I called it home. Bottles were over-rated and don't get me started on lamps. Pregnant. Shit. I hadn't considered what would happen then.

"Please, Johnny. Don't sulk." I could hear Rahul perfectly well through the metal walls of my home. I really should think about getting them soundproofed. "I was all for releasing you, really I was, but now I've created new life. We're going to have a baby, Johnny—well, Laura and I are, you've got nothing to do with it—and it's a big scary world out there. How can I send my little Farishta out into it alone? It would be remiss of me to do so when I have the greatest gift known to mankind. I'm sorry, Johnny, but what's a few extra years of being my servant, really? I am a good master, I am not a slave driver. And once my little one is established then maybe I will wish you free."

It was not the first time I'd heard the speech, in fact I'd heard variations of it several times over the years. Certainly some of my masters did seem to care for me and they would promise my freedom, then suddenly they had the prospect of becoming daddies and all sense went out of the window along with my hopes and dreams of freedom. Having your heart ripped out and your dreams stomped on wasn't something you got used to but sadly it was something I jadedly began to expect from my arsehole human masters.

Part two of Victoria's wonderful Bollywood books. Set some years after book one we still find Johnny the Djinn serving Rahul and his family. Johnny is sent, against his wishes, to the USA to protect Rahul...

Share what you thought about Bollywood Nightmare and earn reward points.

Other books in the Djin's Amulet seriesView Series Page