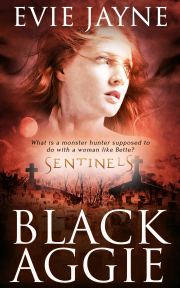 Book 1 in the Sentinels series

Raph lives by a code—Do not mess with the victim—but what is a monster hunter supposed to do with a woman like Bette?

Bette Spencer’s life has been shattered by tragedy not once, but twice. Her mother’s unsolved homicide still haunts her and the recent murder of her nephew has reopened old wounds.

When roughly handsome Raphael shows up on her doorstep claiming to be FBI, Bette is instantly suspicious. And attracted. He knows something about her nephew’s death that he’s not telling her.

Raphael Wilder is a sentinel, a hunter of things that go bump in the night. Over a decade ago he made a mistake that cost his father’s life. He’s hunted alone since that night, refusing to risk another. But loneliness is starting to eat at his heart.

Desperate for closure, Bette pushes her way into Raphael’s life, only to learn that the world is not what it seems, and sometimes murderers are genuine monsters.

Reader Advisory: This book contains some scenes of graphic violence.

The entry was nothing like Jason had imagined. Just a wide paved driveway that led between a pair of oaks and split in two beyond the trees. No rusty, spiked fence or barred gate, no crumbling tombs or ivy-covered arches. Sure, the headstones glowed like pale teeth across the manicured lawns, but it was a cemetery.

He grinned as he dug into his jacket pocket and pulled out the folded map. Spidery, hand-drawn lines crawled across the paper. A big red X marked the spot where he needed to go. The Let’s be pirates theme was kinda pathetic and he wondered once again at his motivation for joining a fraternity. The boys were pretty juvenile.

He set off, taking the left path toward his destination. Man, he had it easy, much easier than Pete and Marty. Those poor bastards were probably getting tarred and feathered right now. All he had to do was sit on a statue’s lap for the night and take a few selfies to prove he’d done it. What a joke.

It got darker the farther Jason traveled from the street. The lawns, with their lines of bone-pale headstones, stretched out on either side of the path. Peaceful and orderly, nothing like a horror movie. To be honest, he was a little relieved. Hanging out in a graveyard at night wasn’t on his shit-to-do-for-fun list.

He dug in his pocket and pulled out his MP3 player. The instant he pushed play, Lorde’s cover of Everybody Wants to Rule the World blasted through his headphones. He hit the volume down button and cursed. Had he left the volume up that loud, or even had that album on his playlist? He’d been studying the last time he’d used the player, and he always listened to down-tempo electronic when he studied. Always. It was something Bette teased him about. He shrugged off the trickle of unease that raised the hair on his arms.

The music kept him company as he took one trail branch after another, heading ever deeper into the span of Druids Hollow Cemetery. By the time the album came to an end he’d left the newer acreages behind. The tidy rows were replaced by scattered graves and the smooth lawn gave way to rough grass. The trees grew close together, old and gnarled. Giant limbs twisted and bent, sprouting low on thick trunks. They stretched toward the earth, almost as if they were trying to dig the bones of the dead from the soil.

Darkness closed in around him. Sweat broke out on his palms. He stopped to wipe it off on his chinos, uttering a quick, high-pitched laugh. Bloody trees and bloody imagination. The playlist came to an end, the final song fading out on Lorde’s haunting hum. In the brief silence, he heard something. A whisper, like a long breath hissing between clenched teeth.

Jason pulled his earphones out, straining to catch whatever the sound was. Did he hear voices? Laughter? His breath came in and out in quick puffs as he scanned the area with widened eyes. No, it was nothing, just the groan of tree limbs in the wind, of fine branches clicking and scraping together.

Was it colder than it had been? He rubbed the goosebumps that prickled his arms. Get it together! If the map was right the grave was in this section, just past that thick clump of bushes. He shoved the buds back in his ears. His steps were quick, but he managed to fight the desire to check over his shoulder. Nothing was behind him, no long-fingered hand reaching to grasp his neck. He swallowed.

Stop it! Just stop it. He rounded the bushes with a sense of relief. It died when he confronted the statue. She loomed over him, an angel of darkness. Her face hid in the shadow of her shroud, a black hole framed by a drape of stone. A patch of dead grass spread out before her, shriveled and pale in the heart of an otherwise green landscape. His heart leaped into his throat. Oh God, how was he going to make himself climb onto her lap?

His legs were numb as he approached. The marble fabric seemed to move, the shadows stretching and shrinking as he got closer, as if she were a living, breathing woman. His heart beat heavy and sluggish in his chest, his blood thick and dense. He swallowed past the ache in his throat. It was so cold. Why was it so cold? He hugged his jacket tight around his chest, shrinking into himself. The perished grass rustled beneath his feet as he took the final steps that brought him to her feet. They were eye to eye, though hers were hidden in the dark hole where her face should have been.

Evie Jayne lives in the midst of the New Zealand rain forest. She's been creating worlds and the characters that inhabit them all her life, writing endless beginnings of abandoned novels.

Then something magical happened, she discovered Paranormal Fantasy and a light bulb went off in her head. The words began to flow and she's been riding the river ever since.

She masquerades as a part time artist, full time mother to two wild sons and in her spare time she rides the edges of her beloved forest on one of her far too many horses.

It's truly delightful when a book this well written comes along.The story flows naturally and is effortless to read. The characters are believable and very well done. The action is spooky, suspenseful and a...

If Black Aggie is any indication, the Sentinel series will continue to be a must-read. Characters felt grounded and, unlike many horror tropes, I was rooting for them throughout. Action scenes were...

Share what you thought about Black Aggie and earn reward points.