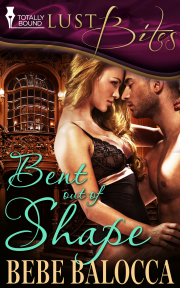 Bent Out of Shape

Jamie's going to have to stretch like she's never stretched before in order to get out of this hot mess.

Jamie Davis dreams of devoting herself to yoga full-time, but has to work two jobs to pay the bills. She jumps at the chance to teach lessons at Twisted Fork Ranch, lavish home of reclusive tech billionaire Marcus Paul.

When she arrives, Mr Paul's assistant, Peter Fletcher, informs her that the first class will be a one-on-one affair. Peter is to report back to his boss with his impressions, so Jamie's determined to put on her best class ever. Sparks fly in the studio and both Peter and Jamie are feeling the burn, but their hot session ends in flames when guards come knocking.

Peter's not everything he's made himself out to be, however, and soon he and Jamie are on the lam in Twisted Fork. With Dobermans on their trail, they try out some exotic new positions that Jamie never learned in yoga school.

The clock's ticking, though, and even the most fabulously grueling workout has to come to an end. Jamie just hopes that their cool-down doesn't involve time behind bars…

Exciting things are in store today! The stars are perfectly aligned for you. Once-in-a-lifetime opportunities will present themselves. You must act boldly to seize them. In addition to a fortuitous business arrangement, a new romance beckons.

The key to success in both arenas is to avoid overthinking. The logical side of your brain will try to dissuade you, but hesitating out of fear will cause the opportunities to slip away.

Trust your inner self, throw caution to the wind, and experience pleasure and success beyond your wildest dreams. Most of all, remain flexible and receptive to the gifts the world has to offer. Be wary of false claims, for deception and danger are ever near, while bearing in mind that even the blackest lie can harbour a nugget of golden truth.

Jamie steadied her nerves and spoke into the intercom. “Jamie Davis. I’m here to give a yoga lesson to members of the staff. I’m expected.”

She strummed her fingers on the steering wheel. Security, obviously, was of paramount importance at Twisted Fork Ranch. Jamie had spied cameras at regular intervals along the top of the fence as she’d driven up, and she suspected that there were hidden ones as well. The window at the guard’s station was a two way mirror shaded by a deep overhang. She could see nothing inside the small structure, but she knew she was being studied carefully.

“Identification please.” A drawer in the wall of the guard station slid open. Jamie smiled, determined to appear cheerful and professional as she withdrew her driver’s licence from her wallet and placed it in the drawer. This job was a big deal—huge—and she was bound and determined not to screw it up.

“One moment please,” the deep voice intoned once more.

At the count of forty-four, the drawer reopened at last. “Thank you, Ms Davis. Please turn right when the drive splits and park in front of the first building you come to. Have a nice day.”

The automated black gates swung open for her, and Jamie pulled onto the grounds of the estate. The clink she heard as they shut behind her sounded oddly ominous, but she shook off her apprehensions. A permanent gig at Twisted Fork Ranch would be one very big step towards quitting her hideous waitressing job at the Bongo Burger Shack and devoting herself to yoga full-time. This appointment was a dream come true, and scoring this position could truly start her on her way to legitimate success doing what she loved. She’d been thrilled to read her daily horoscope this morning—what if she had wild success in love and in her career? It was almost too much to hope for. Almost. Madame Callais’ horoscopes had never steered her wrong before… Jamie’s heart skipped a beat. Think flexible. Think receptive. I can do this.

Share what you thought about Bent Out of Shape and earn reward points.