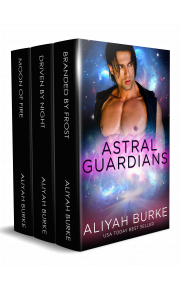 Beneath the cold can sometimes lie the hottest of heats.

Aminta Tran is a helicopter pilot sent to Alaska to fill in as a replacement until the rescue team gets a new pilot. The man who comes to get her is Dex Collins, the team’s second in command. While there’s instant attraction between them, she remains focused on doing her job and finding her artifact.

Dex isn’t sure what to make of the newest team member. They’re sharing space and each day it’s harder for him to remember the line between professional and personal.

When it comes to light he’s who she is destined to be with, will they be able to weather the storm brewing both between and surrounding them?

Sometimes we need to step from the shadows.

Tiarnán Malone is one of the best warriors of the Guardians. Sent to meet a woman to pick something up for his mentor, he saves the woman who is to be his mate. And his artifact. Circumstances throw them together, but while he knows they are meant to be, she isn’t as easily convinced.

Calida Michaels can’t complain about how her new savoir and companion looks. However, she’s not so quick to buy this ‘mates forever’ talk, especially when there’s another woman who takes precedence over her, time and time again.

Despite all that’s going on around her and her feelings for him, Calida eventually leaves, unable to withstand the pain. Will Tiarnán reach her in time or will she be gone forever, relegating him to a world completely driven by night?

Sometimes the end is really just the beginning…

Dracen Lloyd is the final Guardian looking for her artifact. Believing she’s a danger to her brethren, she leaves the vineyard to seek solace. What she finds is a man named Lucas Kyle.

Luc isn’t quite sure how he got to where he did or who this woman is who saved him. All he knows is the craving he has for her eclipses everything else. The longer he’s with her, the more he falls. Will he be able to remain in her life, or will circumstances take him from her before he’s ready to let her go?

“God dammit, Frost, can you not just hold her steady? I’m about to lose my fucking lunch all over the interior.”

Aminta ‘Frost’ Tran hid her grin as she leaned in, the straps holding her to the seat. “I told you we were taking this baby out to test it. Testing does not in any way mean flying in a straight, boring line.”

“Not in your world, anyway.”

“Which is important, since this bird is my world.” She banked them left, smirking as Sean Mahoney turned a shade of green she’d not seen in years. “And if you mess her up, you’ll be cleaning her with a toothbrush.”

“You’ve got an evil streak in you, woman. I thought you were supposed to be nice.”

“I am being nice.” She leveled them off. “Do you remember that scene from The A-Team where Murdock tells them about ‘going cold’ right before he shuts down the bird? I’ve always wanted to try that.” She waggled her eyebrows at him. “Ergo, this is me being nice since I’m not doing that to you.”

She tsked before taking them into a fast dive, streaking past the jagged cliffs following the ocean then skimming along it. “Never good to threaten the one at the controls.”

“I’m never getting into a chopper with you again.”

“You know I’m going to miss you, Sean.” The way the sun shone off the water—like hitting a cache of diamonds—never failed to make her smile.

“Really? Is that why you’re trying to give me a heart attack during my last ride?”

“Figured you needed a grand send off. If all I did was fly from point A to B without any type of variation, you would have been under the assumption something was wrong with me.”

She moved them up before veering to the left, soaring just above the treeline.

“Nope.” She glanced down and circled before setting the helicopter down with the most tender of bounces. “We’re here.”

Sean frowned. “We’re in the middle of nowhere.”

She opened the door. “Come on, cranky.” After jumping out, she walked to the front of the chopper and crossed her arms.

“Do we have time for this?” He followed, hand along the side, as he steadied himself.

“Yes.” She pivoted and strode toward the treeline.

“Do I even want to know why you’re not in a flight suit?”

She waved at him over her shoulder. “Didn’t question that at the beginning?”

He caught up to her. “I’m sure I would have if I wasn’t wrestling down my food to keep it from spraying your window.”

“You are going to miss all this, you know.” Her words rang with authority.

“Surprise!” the cry plowed over any reply he would have made.

Sean slid his arm around her shoulders and gave her a squeeze. “Thanks, Frost.”

She smiled, glancing around at the rest of their unit. They had cake and other food set out on the table. This was her home away from home. These people. Together, she and Sean hastened to join in the festivities.

Much later her cell phone vibrated in her pocket and she stepped away from the party to answer it.

“You’re needed, get your ass back here on the double.” Her boss, Taggart Force, issued his command in his typical brisk, no-nonsense tone.

“On my way,” she said. With a sigh, she shoved her phone back in her jeans pocket. “That’s it for me, guys.” She blinked a few times and paused at the sight of the rest of them sitting around and not packing up.

“We didn’t get called,” Thomas said as he popped the top of another beer before shoving the rest of the six-pack back in the cooler.

“Taggart called me, so I have to jettison. Can one of you take Sean back with you?” She winked at her friend. “Unless you want to ride back with me, Sean. I’ll be pushing her this time.”

“Fuck that. I’m riding in a vehicle with wheels.”

She chuckled, swiping a piece of cake then shoving it in her mouth as she bolted for her chopper. Swallowing, she waved. “Catch you on the flip side.” She climbed in, strapped in then began takeoff procedures.

Glancing out of the window as she lifted away from the lush green grass, Aminta gave those who’d stopped to watch a two-fingered salute before veering away and accelerating. Taggart never called her unless it was an emergency—he tended to leave it to the automated service that dialed them all when they were needed.

As she flew along the shore, she stared off to the snow-capped mountains. Winter neared, yet she and her friends had taken advantage of one of the final few days of their Indian summer in order to throw the farewell bash for Sean. Given we managed to get it most of the way completed, I will count it as a success. She licked her left index finger, removing the last bit of cake frosting. Too bad there hadn’t been time for a larger piece.

Landing the chopper in her designated spot, Aminta gazed around before she powered down and hopped out. Wonder where he is. Figured he would be out here to meet me.

Milton Hornsby rolled up in a fuel truck and climbed down. “Boss is waiting for you inside.”

She set off at a jog, pausing only once to look back. Milton stood hard at work, refueling her helo. Aminta yanked open the door and strode down the empty hall of the Forest Service building. Those who worked here—and who should have been here now—had been with her saying goodbye to Sean.

Her boots made very little noise as she moved but a single step was all it took to take her to the floor. She shuddered as excruciating pain wove through her veins in place of blood.

“Roz?” No response, but her pain increased with each heartbeat. Sweat rolled from her temples. “What’s going on?” She pushed her question along the common communication line with her brethren.

In the next moment she was hit by an excruciating mixture of pain and loss. She would swear her heart had been ripped out. Tears streamed down her face as she shook with untold emotion. Her sister was dying.

With force she wasn’t sure she possessed, she cried out for her. “Roz!”

“Stop please. You’re killing yourself,” she begged with everything she had. Aminta couldn’t explain how she knew. She just did. Whatever Roz was doing, it was killing her, swiftly.