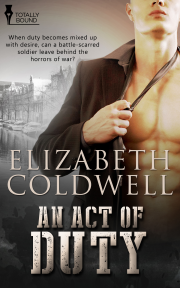 An Act of Duty

When duty becomes mixed up with desire, can a battle-scarred soldier leave behind the horrors of war and enter a world of fantasy and fulfilment?

For Corporal Mark Stockdale, a trip to Amsterdam won’t just provide some much-needed R and R away from the horrors of the Afghanistan battlefield – it’s also a way of keeping a promise to a fallen comrade. But violence has a way of seeking Mark out, even in the most peaceful of locations, and when he stops for a drink in a quiet bar, he finds himself stepping in to help its owner, Robin Sneijder, fight off a group of opportunist thieves. Robin shows his gratitude, and Mark is stunned by the depth of the passion between them, and when Mark wakes in the night from a vivid nightmare of the attack that killed his best friend, Ozzy, Robin is there to comfort him.

Mark watched a man in a tiger onesie cycle past him on a rickety, black-framed bike, and knew Ozzy would have really loved Amsterdam. He’d barely been in the city for half an hour, yet already he was falling in with its relaxed vibe. This was a place to chill, to leave your worries behind for a while. As he looked at the tourists strolling along the cobbled pavements in the September sunshine, it was almost possible to forget that halfway across the world, good, honest men were dying in their efforts to bring stability to the basket case that was Afghanistan. Good, honest men like Ozzy.

He paused to consult the foldout map in the back of the tourist guide he’d bought at the airport. If he took the next left, it should bring him out right in the heart of the red-light district. Whenever they’d talked about visiting the city, that had always been the area Ozzy had wanted to tour more than any other. Forget the canals and the historic gabled houses, some so old they leaned at odd angles and appeared in danger of toppling into the water at any moment. Ignore the Rijksmuseum, where you could admire paintings from every Old Master Holland had ever produced. No, Ozzy had simply wanted to have a few beers and get his end away.

On one of their monotonous desert patrols, he and Ozzy had made a pact to come to Amsterdam on their next spell of leave. They’d never discussed what would happen if one of them wasn’t around by then, even though the fear of death was never far from either of their minds. Making this trip had seemed to Mark like the right thing to do—a way of honouring the memory of the man who’d been the best friend he’d ever had. No, they’d been closer than that. Gary Osmond, known to everyone in the regiment as Ozzy, had been like the brother Mark had never had, and he couldn’t help wishing the guy were here with him right now. He felt a tear threatening to spill down his cheek and blinked it away, glad his eyes were hidden behind dark glasses.

Turning a corner, he found himself confronted with the sight Ozzy had always hoped to see. In almost every ground floor window of the buildings that lined this stretch of canal stood a woman in her underwear, smiling and beckoning to the small groups of men who passed by. Here and there, thick burgundy drapes were pulled across one of the windows, indicating that its occupant had company. The sight of so much exposed female flesh didn’t rouse Mark’s desires, but that didn’t mean he couldn’t appreciate beauty when he saw it. He wondered which of the girls would have caught Ozzy’s eye. The peroxide blonde in the bright yellow bra and panties, maybe, or the brown-skinned, almond-eyed sylph in a PVC corset and thigh boots?

The scenes…exploring some very naughty fantasies, are definitely hot. If you like military men and what they get up to while on leave, if you enjoy reading about a first meeting that...

Share what you thought about An Act of Duty and earn reward points.