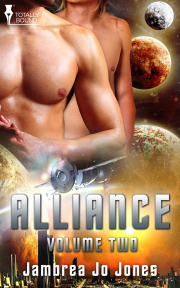 Who knew being bad could be so good?

Voss Potter ran from his life. He wasn't wanted and was sick of being used as a pawn by his uncle. He thought he would explore the world as a stow away on an old friends ship. The only thing he wasn't counting on? Maverick Sayers. The sexy first officer he'd lusted after for years.

Maverick Sayers loved his job. Nothing was better than traveling the world with good friends. One order changes his life forever. Protect Voss Potter. Now they are fleeing across the galaxy one step ahead of a money hungry family and a disease that could kill planets.

Vacation can be its own reward.

James Rodrick deserved a vacation. Running around the galaxy protecting people can be a rough road. His first officer was nicely settled and a cure for a deadly disease had been found. Time for a break. Alphonse Carter was not what the doctor ordered. A con man on the run does not a vacation make.

Alphonse Carter lived life high on the hog pretending to be something he wasn't. His undercover identity was discovered and now he must flee before he is caught by the wrong side. Hijacking a captain with Alliance ties wasn't in the cards, but he had to take what he could.

Will mistaken identity cause havoc or romance?

This was the life. James Rodrick pulled a pair of solar goggles from his pack and lay back on the lounger. He needed this vacation. The last few months had put a strain on his belief in right and wrong. Zeb II was the perfect place to put his worries behind him and relax.

His best friend and ex-first mate, Maverick Sayers, was married and settled on Adair and it was time for James to evaluate what he wanted out of life, but that would wait. Right now he wanted to do nothing but clear his mind. The day was heating up. Maybe later he’d take a swim.

Jim activated the e-reader feature in his shades. A little light reading, a nap, a good dinner and a cocktail followed by dancing later on would do nicely for the rest of the day. He loved to dance and didn’t get to do it nearly enough. Usually he was busy hauling cargo. The life of an ex-Alliance soldier was boring unless they turned mercenary.

His good friend had changed and Rave’s partner, Kain Sims, had disappeared. The last Jim had heard they were back together and things were going well. It was Rave who had helped Jim get going with his cargo business. Jim needed the stability and having his own ship let him be in control. He didn’t have to worry about the mucky grey area the Alliance seemed to bleed into all too regularly. There was only a right way and a wrong way.

Jim pushed thoughts of the Alliance from his mind. The book he was reading was about life on Earth a millennia ago. Fascinating stuff about creatures called dinosaurs. The book toted itself as non-fiction, but Jim wasn’t too sure if it was, especially since the author spouted what amounted to speculation. The great flood of 2050 had wiped out all the physical evidence of life on Earth before humans, then World War III had pretty much destroyed the planet as his ancestors knew it.

The only good thing to come out of the war was space travel. Jim wouldn’t be where he was today without it. He wondered if he could get a crew together to go exploring some of the old world, but that would be too much work. He’d need permits to even think about heading to Earth. The Alliance guarded it too closely and they wouldn’t let someone who’d walked away from them poke his nose around.

It was a good thought though. Jim read more on the theories of what had happened to the creatures and hoped it would keep his attention.

Who was he kidding? He was getting restless. It had only been an hour and the story was good, the sun nice and hot, with a cool breeze coming off the sea, but he wanted to do something. Jim tossed his goggles aside and sat up. Maybe he’d go for a run. This was the first day of his vacation and he wasn’t handling it very well. He still had six days to go until he could go back to his ship-he’d scheduled an overhaul of the systems to force himself to relax. Usually if they took a break from freighting, he and Maverick would hit up a few places and visit with friends but now it was just him. And a pity party for one was not cutting it, so a run it was.

The com he’d carelessly tossed to the side in the sand buzzed before he got completely out of the lounger.

A smile worked its way over his face. It was good to hear from his former first mate.

"Maverick! Why’re you calling me? Shouldn’t you be wallowing in matrimonial bliss?"

"What makes you say that?"

"You sound tense and you’re avoiding the question." Maverick’s laugh echoed across the com. "What’re you doing right now?"

"Getting ready for a run, if you must know."

"You need to be getting ready for a good hard fuck."

Jim missed Maverick, but he was happy he’d finally made a go of it with Voss. Things had been hairy for a while when Voss had almost been forced to marry someone else because his uncle had gone crazy with a plague that was travelling around the universe. The entire situation was one of the reasons Jim had forced himself to come alone to a pleasure planet.

He’d had to hedge the truth while helping Voss out and he’d hated every second of it. Jim was an honest man and lying was too much of a grey area that always came back to bite him in the butt. He’d learned that the hard way at a young age.

"You leave my sex life out of it. Did you call for a reason or just to mess with me?"

"Just to mess with you. Okay, not really. Voss and I were thinking-"

I loved everything about this book...I think you should read this book, for no other reason, that to keep Jambrea feeding my addiction. I really need Angel's story written faster...

Share what you thought about Alliance: Vol 2 PRINT and earn reward points.