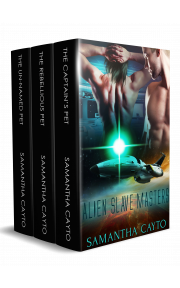 In a not-too-distant future, a lopsided war has led to aliens invading and occupying an Earth settlement. Wid is a young colonist who has been caught harassing the aliens. He and his friends are rounded up and sent to an alien warship patrolling the disputed space. His fate is to serve as a sex slave for the ship’s imposing captain. Wid, at first, fights against his enslavement, but soon learns that not only does he stand no chance against the much larger and stronger captain, he isn’t sure he even wants to.

Like all Travian males, Kell is bound by duty to defend his people. Having risen to the rank of captain, he nevertheless chafes against the boring and endless patrol of the space invaded by the humans. His misses his family and constantly guards against his scheming first officer. He sees his reward of a human sex slave as more of a nuisance. Yet the pretty, fair-haired human’s exotic allure is hard to resist. He finds far more pleasure in the use of his pet than he would like.

Kept naked and leashed, Wid’s days are filled with boredom, while his nights wrapped in Kell’s arms turn from fear into pleasure. Even as the humans plot their escape, Wid and Kell form a bond and their growing affection cannot be ignored. When tensions boil over among the aliens, Wid and his friends may be Kell and his crew’s only chance for survival.

Forced to be the sex slave of an alien warrior, perpetual bad boy, Joel, finds himself tossed into the bed of a space station commander who tests even Joel’s cultivated bravado. While he’d learned to survive an abusive father, the Travian master proves to be a greater challenge. Joel soon finds himself caught between the desperate need to fight his captivity and the unnerving tug of attraction he feels for his new master.

Born to one of the lower castes of his people, Arath has worked his way up to a coveted command. His drive for success has left him isolated from his crew. He has no time or interest in caring for the pesky human pet thrust upon him by his superior. His duty allows him no other choice, so he reluctantly takes what has been given to him. He is surprised by how easily he is seduced by his pet’s allure.

Joel and Arath dance around each other and their growing attraction, until politics intrude and test their tentative feelings. The stakes are suddenly raised, and the choices they make may change the course of history for both of their species.

Stuart McKay, a young man always on the sidelines of life, has been reinvented as Mac, the beloved pet of an alien navigator. At first an unwilling captive, he’s now fallen hopelessly in love with his master. Narith is Mac’s perfect fantasy lover, so much so that Mac does not hesitate to join him on a frightening trip to the Travian home world.

Narith is a brilliant young officer from a lower caste family who has risen quickly up the ranks. He’s also climbed the social ladder by making an advantageous mating. A tragedy has him hurrying home to mend familial fences and fend off the predation of another male. All the while, he tries to tamp down his growing feelings for Mac, yet cannot bear to leave his pet behind.

Mac and Narith’s relationship is tested by family tensions and brought to the breaking point when Narith reluctantly agrees to share Mac with another male. Mac is devastated by Narith’s seemingly cavalier treatment, while Narith is surprised to realize he’s jealous of another male claiming Mac’s body. But more than personal feelings seethe beneath the veneer of domestic harmony and, as trouble bubbles to the surface, the fate of Mac’s and Narith’s very lives is at stake.

Reader Advisory: These books contain sex scenes of both non-consensual and dubious consent, as well as scenes of violence, abuse and torture. There is also a scene of M/F intimacy.

Wid Bryant wrapped his arms around his waist in a futile attempt at warmth. The hangar he stood in was even colder than the transport ship, and without the limits of the confined space, no body heat from others stopped him from shivering. Of course it wasn’t the cold alone that made him tremble. Fright contributed to his state. He had been scared for the last forty-eight hours or so, since he and his cohorts had been detained by the Travian security force.

What had he been thinking joining Joel and the others in vandalizing the administrative building of the occupying force? Nothing, except a deep-seated hatred for the aliens who had invaded their colony. His parents had warned him to keep his head down and hope that hostilities between the two races would be settled diplomatically. Seriously? As if there were a prayer of that happening. How did you negotiate with beings who had the superior power to wipe you off the face of any planet and with the certainty they were in the right? The battle between Earth and the Travians for the colony had ended before it began. Conquerors had no incentive to bargain. Harassing them seemed like the best way to go. Irritate them enough and maybe they’d figure the small planet wasn’t worth the effort.

Or, they could simply round people up and exterminate them. That’s what he had assumed would be his punishment when he’d been caught. Now he wasn’t so sure. He couldn’t understand why they’d bothered to ship him and eleven other guys up to a battlecruiser. Yet, here they were, standing around, freezing and waiting to learn their fate.

“Do you think they’re going to kill us?”

Wid glanced at the trembling red-headed kid next to him—Stuart. He’d been shoved into the transport next to Wid, after being detained for throwing rotten fruit at a Travian convoy—a prank as stupid as the one Wid had tried to pull. The poor guy was only eighteen and more scared than Wid, if that were possible. In fact, all of the other boys that had been brought were no older than Wid’s twenty years or so, and most couldn’t hide their fear. Thank God there were no girls. Surprisingly the Travians had let the one girl who’d been with them, Joel’s girlfriend, go immediately. His mother had scoffed over the Travians being patriarchal, but right now it seemed like a good thing.

“No,” Wid finally answered. “What would be the point? I mean, if they wanted us dead, why bring us all the way up here?”

He mostly believed what he’d said. It didn’t make sense that they’d be dragged so far when it was easy to blow a laser hole in their foreheads back on the planet. Still, something bad loomed. How could it not? As if in answer to his worst fears, the hangar suddenly filled with a dozen Travians. These males were even more imposing than the security detail that guarded the boys. Each one stood particularly tall, close to seven feet, clad head to toe in red leather. Their shiny black hair fell to their shoulders or below, braided in places to keep it off their harsh faces. He couldn’t lie and say that the Travians were an ugly race, but they were unsettling with their pale skin and completely black eyes.

As the aliens filed in and lined up opposite the boys, Stuart let out a little whimper. Wid spared him a glance.

“Don’t let them think you’re scared,” he advised in a low tone.

“Seriously?” Stuart murmured back. “I am scared.”

Wid suppressed a shudder. “I know, just try not to show it. It’s all we have left.”

One of the guards barked out the order in the guttural language of the Travians. God, he hated being able to understand what they said. Once the occupation had been completed, the aliens had forced every human over the age of five to be implanted with a translation device. The foreign words rattled around his head until they made sense to him. The one word was easy to translate. Longer sentences spoken quickly were harder to get. Not that the Travians were patient when a human struggled to understand.

He shut his mouth, however, his bravado long gone.

The tallest of the males stood a foot in front of the others, staring down the line of human boys. When he got to Wid at the end, his gaze lingered. Wid tried not to squirm under the scrutiny. He felt invaded in the more personal sense of the word by the piercing look. After a few seconds, the male glanced away and gestured to another of them. The tall one said something short and quick that Wid didn’t catch. When the other male stepped forward, he headed straight for Wid. Before Wid could even think of recoiling, the taller alien barked out one word.

The steps of the second male faltered. His expression turned sour for a second before he changed course a fraction to go to Stuart. His hand shot out and he grabbed Stuart by one arm. The male’s eyes took on a feral look as he yanked the boy to his body. Stuart cried out and tried to pull away. The male bared his teeth in what could—in an alternate and ugly reality—be called a grin. Then he turned and dragged a struggling and begging Stuart away.

Silence reigned once they’d cleared the hangar. Wid and the other boys were frozen as they digested what had happened to Stuart and what was going to happen to them. The aliens were quiet too, although that seemed to be more about discipline, waiting for a command. The tallest, who was obviously in charge, gestured to another of them. Once again the boys were perused, and Wid recognized the behavior for what it was—they were shopping, picking out which boy they wanted. He didn’t dare think in terms of what they wanted the boys for.

Share what you thought about Alien Slave Masters: Part One Box Set and earn reward points.