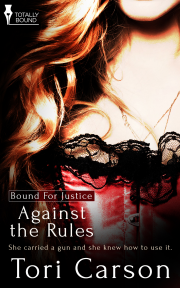 Book 1 in the Bound For Justice series

Targeted by a drug cartel, Teague is out for vengeance until Chantel lands in his lap. Is this fiery, redheaded submissive his lifeline or his downfall?

One nosy keystroke and Teague’s life was changed forever. He lost his identity, his family and is constantly running for his life. There is little doubt that the cartel will eventually find and kill him. Until then he plans to put as many of them away as possible. It has become his single-minded goal.

Chantel was raised with the knowledge that bogey men exist. She carries a gun and she knows how to use it. She is confident that she can take care of herself. Her only real fear is of dying alone, without ever knowing the meaning of true love.

Teague has a weakness for redheads and the cartel knows it. They’ve used it against him in the past. When Chantel literally falls into his lap, he knows it is too good to be true. Convinced that it will be his downfall, he pursues her anyway. After a weekend of life-affirming sex, he vows to never see her again.

Once Chantel has found the man of her dreams, she’s not going to let a threat against her get in the way. Now caught in the sights of a serial killer her father has spent his life hunting down, Chantel learns that there are worse things in life than death.

For a chance to save Chantel, Teague must choose between his life’s work and the young woman who has made his life worth living.

“So, I created this spreadsheet to help me keep my schedule straight. I color-coded the games to align with the level I’ve achieved. That way I can spend the same amount of time on each game, yet track my advances…”

Chantel knew that her eyes had glazed over an hour ago. Rodney hadn’t seemed to notice. He still prattled on about video games and spreadsheets. Neither appealed to Chantel and she sure wouldn’t combine the two. Abstractedly, she wondered if he had a spreadsheet tracking the number of times he had picked his nose tonight. She’d lost count.

The slurp of beer brought her attention back to Rodney. Oh, God, there he goes with the nose thing again.

“Excuse me,” Chantel murmured reaching for her purse and bolting for the bathroom. There was only one for both men and women.

Chantel leaned against the sink and dabbed at the tears trying to escape. “You knew Rodney was a loser and you went out with him anyway. You deserve crappy-ass pizza, wobbly, squeaky chairs and watered-down diet soda.” She turned toward the ceiling, hoping gravity would help keep the tears from rolling down her cheeks. Seeing the rain-stained ceiling tiles only added another candle onto her pity party cake.

In college, she and her friends had once cast a spell imploring the gods to bring forth a bodacious man to live out her fantasies, a strong man who could satisfy her needs sexually and have an intelligent conversation afterward. She’d wanted a man who could set her panties on fire with just a look or a whispered command. Hell, now she’d settle for a man who was more interested in her buttons than the TV remote.

Chantel fell back on her mantra after each rotten date. Life doesn’t need to include men to be meaningful and fulfilled.

She almost groaned at that thought. Being filled… When was the last time she’d had sex? No, don’t go there! It’s not like it was that great anyway. Messy, sweaty and quick.

Another glance at the polished steel that passed for a mirror told her she was presentable. With her head held high, like a prisoner determined to face her sentence with dignity, she pulled open the door.

Teague knew that he was being stupid. He knew he should have left temptation alone, but here he stood listening to the quiet sniffles and the one-sided conversation she was having with herself on the other side of the door. The beady-eyed twerp she’d been sitting with had Teague’s radar going off and his protective streak on full alert.

As the door swung open, he used his body to block her exit. She responded by jumping backward away from him and farther into the restroom. He let the door close behind them. She clutched her purse and the vein in her neck beat fast, but she had a confidence about her he really hadn’t expected.

“I’m sorry I startled you. I just wanted to make sure you were okay. You looked so unhappy.”

Her response was a very feminine laugh.

God, her tinkling giggle teased his cock in such a wicked way. It also pissed him off. “What’s so funny?” This woman had no self-preservation skills. A man cornered her in the restroom and she started giggling. What the fuck?

“Well, it’s a laugh or cry kind of night. I’m trying to keep to the lighter side.” She flashed him a sexy smile.

He was watching her closely. She seemed to like what she saw. “Fight with your boyfriend?” He was clipped and terse. This hadn’t gone as he’d expected.

Her jaw tensed and an eyebrow shot toward the ceiling. “Blind date,” she corrected with a haughty air that sent his balls ratcheting a notch tighter.

“Dump his ass and I’ll see you home.”

She ran her tongue across her upper lip and her eyes dilated. She sighed as if she’d considered his offer, but her conscience had won.

“I’ve got my own ride, but thank you for the offer. It was sweet of you.” She met his gaze as if he was no threat to her at all.

Her confidence and poise under pressure intrigued him. He’d have liked to spend the evening with her. She would have been a delight in bed, too, but she’d said no. He needed to be a gentleman and respect it.

Mustering all the self-control he’d gained over the years, he made his feet move away from the door.

“Daddy, Daddy, special delivery,” Bobby hollered as he ran in the door.

Agent Robert Foster of the NBIA, National Border Interdiction Agency, grabbed his son and spun him through the air. He marveled for the hundredth time at how the poor kid looked just like him, from his orange carrot top hair to the slight split between his two front teeth. “What do you mean, little man? What have you got there?”

Bobby handed his dad a plain brown envelope with no markings of any kind.

Suddenly sick to his stomach, Robert ran his hand over the top. It was smooth. No hint of wires or powder. Slitting the side, he found a simple index card with, Mr. G. requests target coordinates printed on it.

Robert set Bobby down gently and turned away, fighting the urge to puke. He wiped the sweat from his brow and pushed down the panic. “Son, where did this come from?”

“A friend of yours. Dad, his chopper was so cool. He gave me a ride home from school. He said we might go for a longer ride next time.”

It took a minute for Bobby’s words to sink in. Blood drained from Robert’s face and his stomach knotted. “You aren’t hurt, are you?” He ran his hands from Bobby’s head to his toes as his mind raced, hoping without any real hope that he was wrong. “What did he look like? Did he tell you his name?”

The panic roaring between his ears made it hard to listen. There was little doubt about who it was. Mr. G.’s hit man, Sammy. A cruel, sadistic bastard who would smile for the camera as he skinned Bobby alive and videotaped it for Robert to watch over and over. He couldn’t have been more terrified if the devil himself had taken Bobby for a ride.

“No.” He thought about it for a second. “I don’t know. He said he was a friend of yours. His bike was way cool, Dad. It had skulls on the tank and blood-red forks. I can’t wait to go for another ride.”

At work the next day, Chantel was walking around in a gray fog. After paying for her portion of the meal last night, she’d left Rodney to nurse his beer while she’d gone home alone.

It hadn’t taken long for her to realize she had made yet another mistake. She should have given Yummy Man her phone number. He had a confidence about him she’d rarely seen before. She’d been worried when she’d turned him down. He was a large man, muscular, with scarred hands. If she hadn’t been armed, she would have freaked out.

Since he’d just smiled and let her leave, she figured her concerns had been for nothing. And she’d let a scrumptious man walk away. Oh well, everything about him had screamed ‘single forever’. She doubted he’d want two point five kids and a dog named Spot to come home to each evening. Then again, she didn’t need a ring on her finger and a certificate from the state to enjoy some mind-blowing sex. If he was even half as hot in bed as he had been in her dreams last night, she’d missed a hell of an opportunity.

Still kicking herself over not even getting his name, she almost didn’t notice the well-built man kneeling down, not a foot away, until she ran headlong into him. As her body’s forward motion turned into a downward slide, she thought she saw her Yummy Man from the night before. Damn, another dream. But dreams didn’t rearrange your bra when you ran into them or smell fresh and sexy or scatter your paperwork all over the floor.

“Are you all right?”

His low, masculine timbre started her blood boiling. She was so lost in listening to the cadence all she heard was, “Rumble, rumble, purr.” Finally, it sank in.

“I’m good, really good,” she crooned. Holy crap, he was better looking than she remembered. His blond hair was a bit on the longish side. Obviously, he was a man who followed his own style and looked darn fine doing it.

This story reeled me in! Tori develops an intricate and believable world of suspense while also keeping a romance in the forefront. The characters are well-developed and personal, human beings with flaws...

This was an awesome book to read. The characters and situations are like ones you would encounter every day, which I really liked. The words flow easily from one to another. This story will de...

Share what you thought about Against the Rules and earn reward points.

It’s crazy and more than a little disconcerting how a split second decision can alter the course of one’s life. Four years in college, burning the midnight oil to keep ahead of the bill collectors and to complete enough assignments to graduate, all blown to hell through the fall out of one decision.

Other books in the Bound For Justice seriesView Series Page