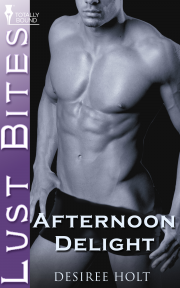 Savannah and Lori were spending the afternoon sunbathing nude on their condo patio and bemoaning the fact that their lives were at the moment devoid of men. Wondering if either of them would ever meet that special someone who seemed to be so elusive.

Savannah Claymore turned her head to look at her friend and condo mate, Lori Avondale, and said, “This really sucks big time.”

She saw Lori lift her sunglasses and glance sideways at her. “What could possibly suck? We’re out here on our private patio, the sun is shining gloriously on our nude and freshly waxed bodies, your favourite jazz is in the CD player, and we’re sharing a pitcher of orange mimosas. Even better, we don’t even have to think about work for two whole days.”

“Excuse me?” Lori sat up and swung her legs over the side of the chaise. “Did you say no men?”

“You heard right. Oh, we’re not exactly without them.” Savannah picked up her mimosa and sipped at it. “We’re just sort of between them. Right?” she sighed, and sipped at her drink. “But I do miss them.”

“Wait. I’ll run to the wall over there, wave my tits down at the sidewalk and see if I can rustle up one or two.”

Savannah burst out laughing. “You would, too.”

Lori studied her friend for a moment. “Having adventures is fun, but do you ever wish you could find that one special man? Someone who could fulfil all your fantasies and you’d be satisfied to settle down with?”

Savannah stared. “Settle down? Why would I want to settle down? I’ve got a great career, a great condo mate and a fantastic sex life. Give that all up?”

Lori shrugged. “You wouldn’t have to give up anything except the other men.” She wiggled her eyebrows. “Oh, and one of us would have to find another place to live.”

Savannah finished the drink she held. “I don’t know. I guess I’ve never really thought about it. Have you?”

Lori nibbled her lower lip. “Not a lot. But every so often I get a feeling inside as if, oh, I don’t know, a piece of me is missing.”

“What we need is a new man. Actually, I was thinking of a specific man.”

Lori inclined her head towards the adjoining patio. “Our new neighbour? The hunk next door?”

“You bet. Have you taken a good look at him?”

“Oh, yeah.” Lori wiggled her eyebrows. “Yum yum.” Savannah licked her lips. “Yum is right. I’d like to get my mouth around him. But I swear, I think he’s either gay or blind. If you had two women lying outside in the nude practically in your face, wouldn’t you at least show a little curiosity?”

“I can show curiosity without the hunk next door.” She moved to sit sideways on her lounger next to Savannah and fished two orange slices out of the pitcher. “I’m curious how you’d look with a little decoration. Shall we see?”

Savannah giggled. “Exactly what do you have in mind?”

I've long attested that I love everything that author Desiree Holt writes. All her stories are red hot and delicious, including Afternoon Delight.

Share what you thought about Afternoon Delight and earn reward points.