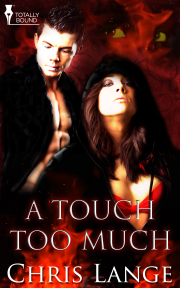 A Touch Too Much

She shall bring death to the race of vampires.

If prophecies are to be trusted, Liv possesses the means to destroy creatures of the night. But in the real world vampires don't exist. At least not until one of them scents her. And pursues her.

As she flees to save her life, she feels the power in her blood. The power that might eradicate a world of violence and darkness. The power that enchains her to the most ruthless vampire of all.

Welcome to Chris Lange's fantasy world where she lives most of the time. She loves alpha males, badass bikers, sensitive men, hot vampires, angels, demons, cowboys, cops, ghosts, knights and kings.
She's a dreamer and a storyteller. She writes about love, love, love, and sometimes she leaves her characters' bedroom door open.

Chris Lange knows how to write vampires. She loves them as much as I do because she always wraps me up in her stories from the beginning. Rogan was a dark, sexy, and amazingly gorgeous vampire who was...

I really liked that this book was a bit longer than the others in this series and you got to enjoy the vampire smut a bit more. And there was plenty of that in this book! The world building is once again...

Share what you thought about A Touch Too Much and earn reward points.