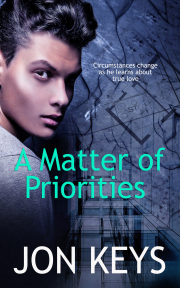 A Matter of Priorities

After being disowned by his family, Cooper judged his self-worth by his latest hook-up. But circumstances change as he learns about true love.

Cooper Dias is a better-than-average college student with a major in architecture and a love of dogs. But while he plays the role of campus playboy, he believes no one would care enough to worry about him—except his best friend Liam. His expectations are simple—searching for the latest hook-up. His newest obsession is his professor, Lucas Nyman, who has asked Cooper to work as part of the team for an out-of-class project, which he eagerly accepts.

At a celebratory evening at Professor Nyman’s home, Cooper is invited to fulfill his latest fantasy—a ménage à trois with the professor and his husband. But the fun turns into something much weightier when pillow talk turns into friendly advice from the pair whose bed Cooper has shared. After a close call that leaves Cooper shaken and a confession from Liam, Cooper begins to realize that life is not as he thought.

I breathed a sigh of relief. I’d gotten a few minutes of much-needed rest when my design class was dismissed early, giving me the time to get an iced coffee and relax. In the past few months the area around the coffee shop had been converted into a collection of overstuffed chairs, low tables and glass-walled meeting rooms with the idea of serving the changing expectations of contemporary college students. But it also meant it was an area bustling with activity, and it took a few minutes to find a cozy chair nestled into one dim corner. The semi-private corner was perfect for my current favorite hobby—checking out hot men.

As I sipped at the coffee, I started studying the local scenery. After a minute or so I was disappointed by what I was finding—saggy-ass guys, some with no butts and even less with any indication of the size of the package they were carrying. My cup was half emptied when the prospects took a definite turn for the better. Not a typical college student, this hunk was sporting a tapered shirt that showed off a perfectly framed, round, muscular butt. At least he hit all the check boxes on my hot-guy list.

He stepped into the omnipresent line at the shop and I got a good look at the man who was rapidly becoming my lust of the day. But the biggest surprise came when he turned to the side. It appeared as though someone had stuck half a melon in the front of what would have already been decent jack-off material. When he shifted his weight, it seemed like something alive was moving in his pants.

I watched for several minutes until the guy with a python in his pants disappeared down the other side of the hallway. I ran my tongue over my lips and realized two things. First, I had finished my drink and class would be starting soon. Second—and more of a problem to me—I now sported a pretty good woody myself and wasn’t sure how to mask my excitement. Time to wrap this up. I don’t need to be late.

Holding my bag in front of me, I darted into the packed hallway with the hope no one would notice. A minute later I walked into the classroom and headed for my spot. It was funny. The professor didn’t assign seats but everyone acted like he had. When someone sat in a different place, it screwed everyone up. Most people are such followers.

I dropped into my chair, tossing my bag between my feet. I unzipped it, dug around then pulled out my notebook. I clicked my pen, ready for the avalanche of notes Dr. Nyman always seemed to generate. But my goal today was to not daydream about those packed jeans. You’d think I could keep from drooling over his well-muscled ass. About that time, Liam, my roommate and best bud, landed in the seat beside me. He grinned, tucked his hair behind one ear and pulled out his notes. Liam’s bright smile glowed when he turned toward me.

Before we could continue our banter, a snort came from behind us and I glanced back to see Morgan, the conscience of our trio, rolling her eyes.

“What? Something twist your panties?” I asked.

“Only that we’re sophomores in college and you two are still doing the same junior high crap.”

Morgan puckered her lips until they looked like a hummingbird’s butthole. “I ditched Keith, not the other way around. And if you want to piss me off—”

The chatter in the room died. I glanced back to find Dr. Nyman moving to the lectern. The students rushed to get ready, which silenced my two friends.

“Afternoon, everyone.” He smiled and I swear he winked at me. “Glad to see you could sober up enough to make it.” There was a soft ripple of laughter. Most of the students liked Dr. Nyman and I wasn’t the only one with a huge crush on him. My thoughts drifted, but then I realized he was still talking.

“Everyone picked a good day to come to class. I’m going over the roofing information you’ll need for this afternoon’s lab.”

From that point on, the information bombardment was continuous. I focused on class instead of how Dr. Nyman looked. My attention remained riveted on the lecture until almost the end of the period. I let my thoughts drift back to the recent scene at the coffee shop and superimposed it on my professor. By the time the final instructions had been distributed I was hard as a rock, and for the second time, there was no way I could stand without it being obvious my mind hadn’t been on the lecture.

Stalling, I searched through my bag while I fought to think about anything other than the hot man who taught this class, but I couldn’t seem to get him off my mind. All I could think about was making out with Dr. Nyman.

Stop it. This is not helping. I’m even harder now.

I heard footsteps coming closer. I was one of the few people left in the classroom with the professor I lusted after. I didn’t dare glance up. But the steps halted and I did the forbidden—lost myself in Nyman’s sky-blue eyes.

“You okay, Cooper? Anything I can help you with?”

My macho posturing disappeared in a gnat fart and my only goal was to keep from embarrassing myself. In an unconvincing tone I said, “Nah, my shit just moved around.”

He reached out, squeezed my shoulder and the sensation seemed anything but platonic. I might not have been an unbiased judge after all of the day’s events, though. A second or two that felt like hours passed before he lifted his hand. But as he began to move away, he gave me another squeeze. My thoughts were fuzzy as I stared into his eyes. He winked at me again. This time I was certain. Did I miss this whole winking thing before?

Dr. Nyman shifted the class materials in his arms before climbing a few steps. He turned back. “We’re covering a lot during lab. Make sure you review everything I introduced this morning. You never can tell what I might ask.”

With that, he took the steps two at a time and disappeared through the exit. Before the door could click shut, the next class began filling the seats. Still rock hard, I stood, holding my book bag against my bulging crotch and realized Liam was waiting for me as I worked my way through the incoming crowd. Once I’d gotten out of the room, I thought about ways to spend the break before my next class and smiled. Our apartment was nearby and I had just the solution.

Liam gave me a grin that stretched across his face. “I’ll race you.”

Jon Keys’ earliest memories revolve around books; with the first ones he can recall reading himself being “The Warlord of Mars” and anything with Tarzan. (The local library wasn’t particularly up to date.) But as puberty set in, he started sneaking his mother’s romance magazines and added the world of romance and erotica to his mix of science fiction, fantasy, Native American, westerns and comic books.

A voracious reader for almost half a century, Jon has only recently begun creating his own flights of fiction for the entertainment of others. Born in the Southwest and now living in the Midwest, Jon has worked as a ranch hand, teacher, computer tech, roughneck, designer, retail clerk, welder, artist, and, yes, pool boy; with interests ranging from kayaking and hunting to painting and cooking, he draws from a wide range of life experiences to create written works that draw the reader in and wrap them in a good story.

For a sexy short, this is definitely worthy. And if you’re into reading menagé erotica then this will definitely get you flushing.

Share what you thought about A Matter of Priorities and earn reward points.