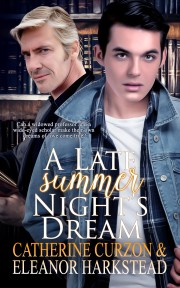 Among Oxford’s dreaming spires, can a widowed professor and a wide-eyed scholar make their own dreams of love come true?

Simeon Shakespeare is living his academic dream. As an Oxford scholar, he spends his days in libraries and whiles away his nights at the theater. A mix-up over a seat number leads to a very awkward first act, but that’s nothing compared to what happens when the lights go up.

Professor Anthony Meadows is finished with love. Shattered by the death of his husband, he divides his time between his book-lined study and Oxford’s theaters. The last thing he needs is an annoying research student bickering with him over who should sit where.

When Anthony and Simeon discover they have more in common than a shared love of the Bard, it looks as though the stage is set for romance. Yet with the memory of Anthony’s lost love keeping the professor from moving on, can Simeon’s love mend his broken heart?

Simeon pulled the ticket out of his pocket as he ran up the steps of the theater. Thanks to the bloody traffic in town, he was almost late for curtain up. He checked his seat number again and hurried through a door from the foyer into the busy auditorium. The house lights went down almost as soon as he found his row.

“Excuse me…sorry.” His seat would have to be right in the middle of the row, wouldn’t it? Best seat to have, but not if you turn up late.

With only the green glow of the emergency exit lights to guide him, Simeon found his way to the empty seat. He squinted at the ticket and—someone is in my seat!

A tall someone who Simeon could barely see in the dark.

Music began to fill the auditorium, an overture before the play began. Through the strings and brass, Simeon hissed, “You’re in my seat!”

Someone tutted, perhaps the lady who was craning to peer around Simeon at the stage. Why was she so keen anyway? The curtain was still down—she was hardly missing the action.

At Simeon’s words, the man who occupied his seat peered up at him through the gloom and asked in a cut-glass whisper, “I’m sorry?”

Simeon wafted his ticket at him—not that he’d be able to see it in the darkness. “You’re in my seat.” Something in the way the man had spoken made Simeon add, without a hint of sarcasm, “…sir.”

“Sit down,” the lady hissed, patting Simeon’s arm with her rolled program. The interloper in his seat reached out one hand and tapped his finger on the empty seat beside him. His seat, the seat he should be in, not Simeon’s central seat.

“Sit down,” the man echoed in that same plummy whisper, dismissive and disinterested. “I’m in my seat.”

Simeon sighed in annoyance. “You’re not—you’re in mine! I chose it on purpose, and you’re sat in it!”

“What number seat are you looking for?” He asked it as though Simeon was the most unimportant creature in the universe, with the same throwaway condescension of his worst undergraduate professors. His hand remained on the empty seat and he said, “This is seventeen.”

“Yes—seventeen! That’s my seat. Look—look at my ticket, for heaven’s sake!” Simeon held it closer to the man’s face.

His nemesis tapped the empty seat again and he told Simeon, “This is seventeen, I’m in sixteen and—”

“Fifteen,” the woman snapped, patting him a little more forcefully with her program. “Now sit down, you bloody hooligan!”

Simeon popped forward the collar of his denim jacket, a move he had learned long ago from old films. “Hooligan? I merely wish to sit—”

Simeon dropped down into the empty seat and looked at his ticket again. His was seventeen, and that was definitely the empty seat.

“Sorry,” he whispered. “How embarrassing—but it’s so dark, I…”

Yet his neighbor didn’t offer him so much as a glance, merely gesturing with one hand, a flick of the wrist that commanded silence. A faint glare of light reflected for a moment from the jeweled cufflink that peeped out from beneath the sleeve of the man’s jacket, then Simeon’s attention was caught by the curtain which, thank God, was finally beginning to rise.

This isn’t going to be an awkward three hours at all, is it?

Simeon was soon carried into the play. The scenery was gorgeous, and he overlooked the unimpressive acting because whoever was playing Theseus—if only Simeon had had time to grab a program—was a thoroughly delicious silver fox. As he settled into seat seventeen, Simeon became aware of a scent from somewhere nearby—a very pleasant cologne. The kind that Theseus would wear, in fact. Manly. Distinguished. The cologne of a mature man, who—

Christ, it isn’t the grumpy sod sat beside me, is it?

Simeon peered at him from the corner of his eye.

It wouldn’t be him. He had the voice and manner of an old-school toff. Lord knows this city has enough of them, and none of them wear cologne like that. Oh, for his own Theseus wearing that cologne.

Simeon forced himself to concentrate on the play, even though the energetic young actors didn’t hold much interest for him. But with any luck, Theseus would turn up again as Oberon, King of the Fairies.

A man can dream.

Before Simeon had time to lament the departure of Theseus too much, the curtain fell and the house lights came up. The interval. He really could do with a drink. Perhaps he should do the decent thing and apologize to the man who hadn’t been in his seat?

He glanced round at the man who’d sat so quietly beside him in the dark and held his breath as he looked at him.

The woman who had weaponized her program shot Simeon a pointed, disapproving look before bustling from the row. It was only then that he realized the couple weren’t together at all. In fact, as the woman departed, the man in seat sixteen was gazing fixedly at his program and clearly trying to pretend that Simeon didn’t exist.

Bloody hell, how could I have been so stupid?

The man in seat sixteen was gorgeous.

A head of thick blond hair, stranded with silver, and a strong jaw. Tall. Nicely dressed—far more nicely than Simeon. The man in seat sixteen seemed to have made an effort for going out to the theater, with a shirt and tie and three-piece suit.

And he was wearing that damn cologne.

Simeon turned in his seat and grinned him. “Mate—look, I’m going to grab a drink. Do you—can I get you something by way of apology? Least I can do.”

Every time I think this dream-team duo can't get better, they prove me wrong! I think A Late Summer Night's Dream might be my favorite story yet from Curzon and Harkstead. It's chock full of adorable sexy...

I came across the book on Facebook, and something called to me about it, not exactly sure what, but you know I'm all about sharing my book feelings and I felt this book PULLED me. And I'm so glad it di...

Share what you thought about A Late Summer Night's Dream and earn reward points.