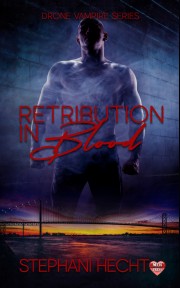 Micah knows he should be one happy vampire. Not only has he been reunited with his human family, but he's found his mate, a very sexy vampire/werewolf named Ozzie. He has everything he ever wanted and more. However, if there's one thing Micah has learned since being transformed, it's to never take anything in life for granted. Not only do he and Ozzie have a huge bounty on their heads, but their vampire clan is threatened by enemies from both within and outside. Micah's worst fears are realized when everyone and everything he has ever held dear is attacked. In order to protect them, Micah must become the very thing he hates. One unspeakable act forever changes him and Micah knows he'll never be the same again. Will he ever be able redeem himself and home? Is so, will Ozzie still love him?

Share what you thought about Retribution in Blood and earn reward points.