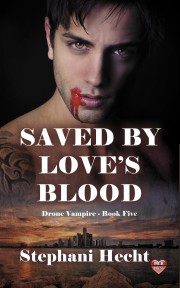 Born a warlock, the one thing Ethan had been taught all his life was to hate vampires. For centuries, a bitter war existed between the two societies, but with new enemies threatening both sides, an uneasy alliance has been formed. Ethan finds himself having to embrace, not only his half-vampire brother, but a whole vampire clan in order to protect his coven. Against his will, he finds himself drawn to one vampire in particular--a dark, handsome soldier named Zeke. But, there is no easy path to a happiness for either of them. They both have demons to fight and have trust issues. But, it's more important than ever that they lean on each other. Can Ethan let go of his past and let his love for Zeke carry him through? Or are they going to lose everything, including each other?

Share what you thought about Saved by Love's Blood and earn reward points.