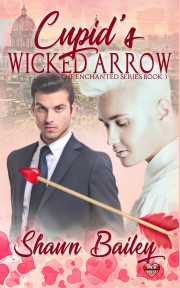 Eros (Cupid) takes a much needed vacation. He puts his younger brother Gracien in charge this year of making people fall in love. Problem: Gracien isn't an ordinary cupid, he's Santa's angel, a mischievous fun-looking male who Eros tried to destroy when he was born. The archangel Michael has assured Eros that Gracien can handle the job. Eros isn't so sure, but he has enough trouble keeping his self out of danger when the archangel Gabriel shows up at the hotel in Rome where Eros has gone for a little R&R. The last angel Gabriel expected to see walking around the Louvre is that trouble-making Eros whom Gabriel has been in loves with for nearly two centuries. Eros accidently shot Gabriel in his behind with one of his powerful arrows and now it is Gabriel's chance to make him pay with his heart for what he did.

Share what you thought about Cupid's Wicked Arrow and earn reward points.