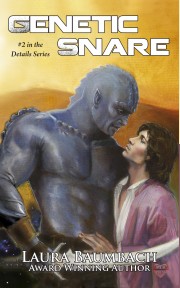 Betrayal, passion, adventure, primal sex, and a fight to the death. Mating a 26th century Oracan Bounty Hunter with a 18th century pirate has its little glitches. Bounty hunter Talos bows to pressure to bring his mate home for the completion of his strict warrior cultureâ€™s bonding ritual. Aidan, displaced 18th century Earth pirateâ€” light-fingered, sly, charming and understandably naive about the new world heâ€™s been thrust intoâ€” canâ€™t wait. Even if it turns out someone wants him dead. The 26th century looks different, but it turns out to be a lot like his old life!

Share what you thought about Genetic Snare and earn reward points.