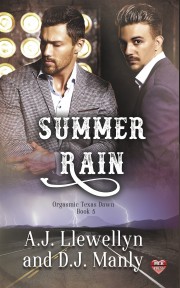 Rookie Dallas Marshal Sean Mercado, and Canadian cop Nicholas Fournier, are pulled into Jubilee and Kieran's lives after a near death experience for Jubilee who is shot during a bank holdup that leaves him seriously wounded. Former Canadian Special Ops Nicholas Fournier never dreamed making a deposit at a Dallas bank for his ailing aunt would change his life, but it does. He meets US Marshal Jubilee Mason who in turn introduces him to Sean Mercado, a new recruit to the Big D. Nicholas is still reeling from a romantic fiasco where he threw caution to the wind traveling to Texas to meet a guy he met online. Though planning to fly back home, he's tempted to spend more time with the hunky Louisiana transplant and learn about the US Marshals. He soon finds there's a lot going on in this hectic Texas city and it ain't just summer rain.

Share what you thought about Summer Rain and earn reward points.