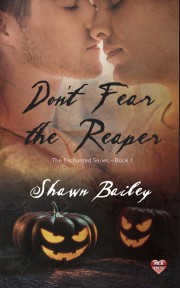 Jaelyn has always been told that there was life after death, but he didn't take it seriously until he died. The only mortals who were supposed to be able to see him were the ones who were about to die. Grim Reaper Syden Embers is quite surprised when the son of the recently deceased Ellen Taylor can not only see him, but Death Angel Five too. Syden turns to three of the archangels for an explanation and learns that Jaelyn is not only a latent guardian angel, but also Syden's future mate. Syden refuses the generous gift even though he finds the young man attractive. Michael just laughs and magically places a wedding band on Syden's hand, bonding him to Jae, as he likes to be called. Now Syden has to figure out how to activate Jae's powers and to prepare him to die and leave the life he once knew behind.

Share what you thought about Don't Fear the Reaper and earn reward points.