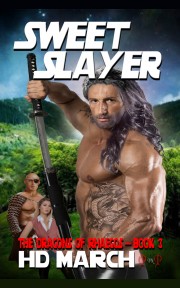 Sweet Slayer The Dragons of Rhaegos #3

Harlinne will forsake her life for revenge, but what will she sacrifice for the chance of love? In search of the cyborg that killed her brother Harlinne makes a horrific discovery whilst working for the Order of Slayers. Landing on the planet of Lyra after stealing the shuttle she finds her companion hard to lose. Korchek the sexy dragon shifter is an overprotective pot of testosterone who claims she is his mate. Determined to chase down the cyborg Harlinne finds he's involved in a vile trade that goes on deep beneath the mountain of Vass Rise. However Korchek won't take no for an answer and soon she is writhing beneath his hard body. What Harlinne doesn't know is if there is a future for them. Killing the cyborg could mean her own death, yet she can't see any other way. Her oath for vengeance is something she won't deny.

Share what you thought about Sweet Slayer and earn reward points.