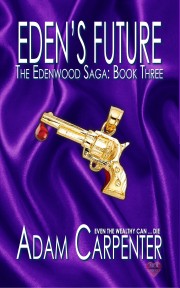 Chad Singleton learns a stunning truth, and uncovers a layer of betrayal that hits far too close to home, in the cultimation of the Eden saga Ever since the gorgeous Chad Singleton returned to Edenwood, the family estate from which he was banished as a teenager, he has uncovered a series of secrets and scandals. Now the questions surrounding his father's death are overshadowed by the arrival of a mystery man, another shocking death, and an unexpected family reunion. Chad now faces an uncertain future as his past sexual transgressions threaten to undo him. What he most wants is his ex-lover, burly Chief of Police Brett Ellers. Both men have their secrets and only together can they defeat their demons and indulge their undeniable passion for each other. As forces within Chad's family threaten to prevent his happiness, one more cataclysmic event will forever change the course of his life. In Eden, even the wealthy--especially the wealthy--will die.

Share what you thought about Eden's Future and earn reward points.