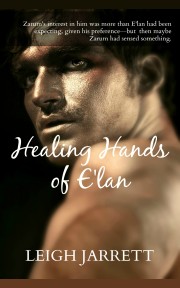 <p>Provocative Prehistoric Erotic Romance<p> <p>Zarum's interest in him was more than E'lan had been expecting, given his preference but then maybe Zarum had sensed something.<p> <p>E'lan had been told all his life that he was the most beautiful and alluring girl and now woman anyone had ever set eyes on and each time the clans gathered to seek mates for their younger clan members, E'lan enjoyed the admiration bestowed upon him, but the necessity to keep his true gender and sexuality a secret prevented him from finding a mate for himself.<p> <p>As the healer of the Clan N'kip, E'lan was also their spiritual leader. A position passed down to him by his mother, strictly a woman's position within the clan. Only the elders knew of the deception his mother had strategically undertaken throughout E'lan's life.<p> <p>This mating season, four spirits willing, he would be included in the celebrations. The elders would choose a suitable mate for him, and he'd be permitted to take that man back to his sleeping platform and fulfill his long-awaited desires.<p>

Share what you thought about Healing Hands of E'lan and earn reward points.