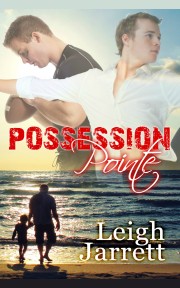 &lt;p&gt;Marc Tucker and Adam O'Neill typically wouldn't have crossed paths due to their vastly different career choices. Marc has been playing professional football for the past two years, straight out of college, while Adam has been honing his craft since he was nine years old; when his mother bought him his first pair of ballet shoes.&lt;p&gt; &lt;p&gt;Mandatory training for the offensive players on Marc's team finds him in a ballet studio for the very first time in his life. The coach has told them it will improve their flexibility and agility, but Marc isn't the least bit impressed with the idea until he catches sight of their new ballet master. Adam's beautiful lines and lean muscular presence have Marc's body warming up in all the right places.&lt;p&gt; &lt;p&gt;But has Marc made a seriously misplaced assumption about Adam's potential interest in him. And will Adam's strict religious upbringing come between them before they've even completed a first down.&lt;p&gt;

Share what you thought about Possession Pointe and earn reward points.