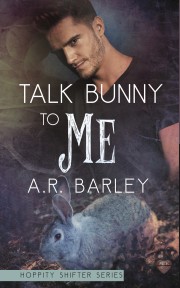 Talk Bunny To Me

When werewolf hunter meets bunny shifter, romance is the last thing either one of them expects to find... but Benjamin Holland is a werewolf hunter--and a pretty successful one. He's hunting a rogue wolf in Minnesota when he trips over a bunny shifter and takes the twitchy nosed little dude back to Illinois. It's strictly catch and release. He needs to get laid, but after getting his heart crushed by his best friend Peter he's not looking for a forever mate. Mating is the last thing on Justin's mind. He's just escaped an arranged marriage to his warren's next Rex. He wants to make up for lost time and build a life for himself in Chicago, but the more time these two spend exploring the city together the better they get along. When Justin's ex-fiance tracks him down to the city, they're going to have to decide if forever might just start with one magical night.

Share what you thought about Talk Bunny To Me and earn reward points.