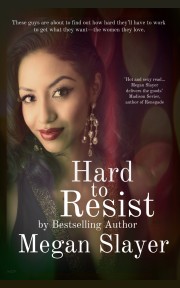 These guys have to work hard to get the girl, but they always get what they want.

Being single on the dreaded day of love sucks. Ask Morgan. Three years in a row of sucky dates have made her gun-shy. But a night of clubbing and a chance meeting with the man who features in her naughty fantasies just might turn this girl’s thoughts around. Maybe.

The moment he laid eyes on Morgan, Trip knew she was the woman for him. What better day to make his move than Valentine’s Day? He’s about to find out how hard he’ll have to work to get what he wants—her.

Could the worst day of her life really be the best thing to ever happen to a girl?

Lacey Carmona loves the nightlife. Carefree and happy, she excels in her accounting job at her brother’s club, Club56. One night compromised by lies changes her whole life. Add in an overprotective older brother, and things are bound to get a whole lot worse. She’s not looking for a man, not even the one guy who embodies every one of her fantasies. She helped create the situation, and she’ll work it out—on her own. Too bad Chris Welch is so hard to resist.

Sometimes the best-laid plans need a little tweaking to make them something more irresistible.

Share what you thought about Hard to Resist Anthology and earn reward points.