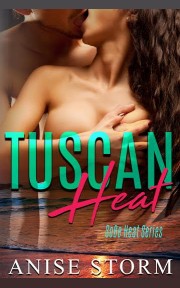 Having known each other since birth, Mario De Palma and Melania Barone fought worse than siblings. That all changed one evening when dueling tempers exploded into a night of passion and desire under the Tuscan Heat. Three years later, Melania finally has all she'd ever dreamed of ... a successful Italian restaurant... a group of close knit friends who were more like sisters... and a single lifestyle on the shores of South Beach. Occasionally she wanted more, but two out of three wasn't bad. After enjoying world-wide culinary success, Mario returned to South Beach intending to open a restaurant of his own. That isn't the only reason he returned to Florida, though. He moved home to claim the one woman who hadn't left his mind since their night together in Italy. More than tempers explode when they reunite, especially once she believes that he's out to sabotage her restaurant. Will Mario be able to convince Melania of the truth before a force of nature threatens to end that dream forever?

Share what you thought about Tuscan Heat and earn reward points.