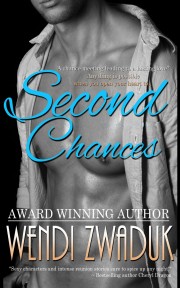 Anything is possible when you only accept the best—even if it takes some second chances. Four stories of white hot romance from bestselling author, Wendi Zwaduk.

SIMPLY THE BEST
Can this seasoned officer accept what he never knew he wanted? The saucy librarian longs to wrap herself in his muscle-bound arms, but can a chance encounter really be simply the best?

SATURDAY NIGHT SPECIAL
He drives fast, lives on the edge and loved once, but things ended in disaster. Can he accept the woman who holds his heart, despite all of their jagged past? She never intended to leave him, but life got in the way. Is coming to terms with her past the key to winning back the love of her life?

BEST I EVER HAD

All she wanted was a pint of ice cream, not to be a witness to a double murder. Good thing she has not one, but two sexy men willing to keep her safe. Sam and Quint had it all until she came along. Can these three find love beyond the bedroom or will things go up in flames?

SWEET IN HIS ARMS
Gage Bell considered Ryan Dane the one that got away—except he never pursued Ryan in the first place. He’s done trying to ignore the way Ryan makes him feel. Now an incident on the track has given him the right incentive to find the sweetness he’s always known he could find in Ryan’s arms. If Ryan will give him an inch and let him take the wheel, Gage is ready to run to the right man over and over again.

Share what you thought about Second Chances and earn reward points.