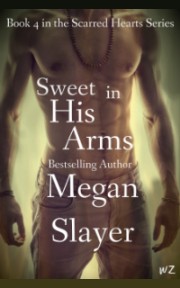 Sweet in His Arms

Rubbin’ is racin’, especially if it’s done with a little sweetness, a little heat and the right man.

Ryan Dane always knew where his heart was—in racing. He loves the sights, smells and sounds of a well-tuned engine humming beneath him. He’s also sure about his sexuality, but the one man he’s always crushed on hasn’t been interested.

Gage Bell considered Ryan the one that got away—except he never pursued Ryan in the first place. He’s done trying to ignore the way Ryan makes him feel, and an incident on the track has given him the right incentive to find the sweetness he’s always known was in Ryan’s arms.

If Ryan will give him an inch and let him take the wheel, Gage is ready to rub the right man over and over again.

Share what you thought about Sweet in His Arms and earn reward points.