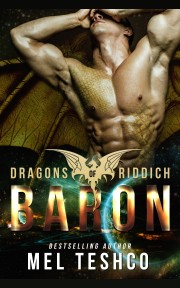 The dragons will search the universe for their one true mate... Piper Meadows hates her strange ability that allows her to sense supernatural beings; it's made her an oddity and an outcast in her small town. It's at a party she doesn't want to attend that her ability is suddenly triggered, making her aware of someone not human. A pity that someone is also the best looking male she's ever seen. Not that it matters, a man like Baron wouldn't look her way twice â€¦ would he? As captain of a mighty dragon army, Baron Alsharma has been exposed to a whole world of violence. Then he sets eyes on the gentle and remarkable Piper, and there is no way in hell he'll give her up. He doesn't care that she's not a rare breeder. If he has to forcibly make off with her to convince her they're perfect together, he will, even while having to keep one step ahead of the Tantonics, his sworn alien enemy. Except the Paranormal Detection Agency is also on his tail and will do anything to capture a shape shifting dragon, even if it means hurting Piper to get to him.

Share what you thought about Baron and earn reward points.