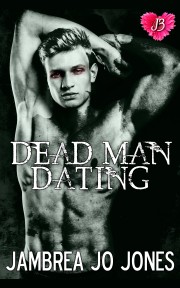 Hollis Morgan's zombie life would be considered boring by most, but for him it was perfect. Until his best friend tricked him into speed dating. With friends like Felix, he didn't need enemies, but after meeting Dr. Umberto Yanukovich, he might forgive Felix. Only problem? The doctor was human. Can there be a future for a zombie and a human?

Jambrea wanted to be the youngest romance author published, but life impeded the dreams. She put her writing aside and went to college briefly, then enlisted in the Air Force. After serving in the military, she returned home to Indiana to start her family. A few years later, she discovered yahoo groups and book reviews. There was no turning back. She was bit by the writing bug. She enjoys spending time with her son when not writing and loves to receive reader feedback. She's addicted to the internet so feel free to email her anytime.

Share what you thought about Dead Man Dating and earn reward points.