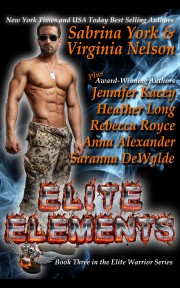 For most of their lives they’ve lived in the shadows, pulled from every nation and background, united by one common cause—an all-consuming hatred of Red Wolf. The unquenchable desire to rid the world of his very existence fuels them, drives them.
These men and women pulled the fallen Elite from the snow-covered wreckage of Operation Phoenix years ago. To some they’re called saviors. To others they’re called traitors.
As Red Wolf’s power grows, the end game they’ve sacrificed everything for may destroy them all. Or just maybe they’ll finally find the peace they’ve been hunting for.
Revenge is their salvation but is there enough humanity left inside them to save?
A new end. A new beginning. Elite Elements.

Satisfying Silicon by Virginia Nelson
Lady Dead may be number five on his hit list, but she trusts that Silicon will come for her. Save her or kill her... either way, it'll be a hot ride.

Cesium’s Capture by Sabrina York
The mission is all that matters...until he meets her.

Vibranium’s Truth by Anna Alexander
It’s not the size of the gun that makes a warrior, but the strength of her convictions.

Francium's Chance by Rebecca Royce
Just because he's on the right side of the fight doesn't mean she can trust him.

Asset: Arsenic by Heather Long
Arsenic is playing a dangerous game, but one with hefty payout—Red Wolf’s head on a platter.

Kryptonite’s Oxygen by Jennifer Kacey
To rid the world of the deadliest wolf a broken girl must trust her kryptonite.

Share what you thought about Elite Elements and earn reward points.