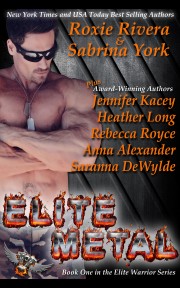 For decades the US Marines funded a top-secret unit known as Elite Recon. A deadly group of men and women sent to infiltrate dozens of countries completely undetected. Mission objectives so extreme casualties were not only probable, but expected. The current batch of operatives had returned from hundreds of assignments unscathed, until one mission went horribly wrong. Several men lost their lives and the group disbanded. The remaining leathernecks were scattered in the wind with new identities.They were told to blend in. Be normal. Or face being forever silenced just like their fallen brothers. Now, two years later, each living member of the group is kidnapped and given a chance to make things right. But this time they're no longer under the thumb of Uncle Sam. A mysterious private backer who knows about their past has brought them back together. No longer are they forced to turn a blind eye to the lost and forsaken. Duty is their salvation.

Bound by Steele - Jennifer Kacey and Anna Alexander - To save his Marine brothers and sister he must accept the past isn't dead and buried. Reuniting survivors means he is forced to first forgive the enemy.

Chrome's Salvation - Jennifer Kacey - A former leader of Elite Recon, reduced to nothing more than an apathetic existence. Until his girl's life hangs in the balance, now nothing will stand in the way of him coming back to life.

Adamantium's Roar - Anna Alexander - Adamantium left Beth to what he thought was a better life, only to find she had been living in hell. Now he'll do anything, break any vow, to claim her as his for all time.

Pure Copper - Heather Long - Copper will do whatever it takes to get the job done, even if it means seducing and betraying the one man who really sees her.

Sterling's Seduction - Sabrina York - When a snoopy reporter threatens the Elite Metal, Sterling will do whatever it takes to kill her story about the team. Even if it means he has to tie her to his bed.

Platinum's Choice - Rebecca Royce - Platinum left the life he had with Rose in New York to rejoin his team and silence the nightmares from Operation Phoenix. But when Rose is forced to go on the run with Platinum's hidden son, he will have no choice but to return to his old life and reclaim what he has ached for every day since. Red Wolf's sniper wants to nudge Plat's underbelly and they're going to find out quickly how deadly he can be.

Share what you thought about Elite Metal and earn reward points.