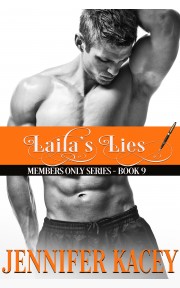 A reporter sent to expose The Library must choose between her past and future when she understands the power she holds on her knees. Laila Harris was a fake, a phony, a fraud. Being sent to dig up proof The Library was actually a private BDSM club was her ticket to a promotion. Simple. Easy. But it wasn't. Not when she would have to betray the three men who captured her heart from the very first heated stare. Not when she would have to turn her back on the women who saw who she'd kept hidden from everyone. A submissive. Choosing between her past and future will rock the foundation of everything she holds true. Until she understands the power she holds when she's on her knees.

Share what you thought about Laila's Lies and earn reward points.