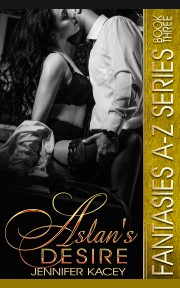 <p>A fantasy so important it has plagued Aslan for her entire married life. ItÃ¢â‚¬â„¢s the simplest thing sheÃ¢â‚¬â„¢s never had the courage to ask forÃ¢â‚¬Â¦until now. Fantasies. Some are elaborate, taking months to research and plan. Others are so basic they somehow become unattainable. Marrying Zeke was one of the happiest days of AslanÃ¢â‚¬â„¢s life. She felt beautiful in her white dress and crystal heels. Then something perfect happened on the way to the honeymoon. In the limo, her husband tore off her dress to get to her. He was undeterred, animalistic in his need to possess her. That need is what she has fantasized about ever since but never again received. Not the same way. To be taken, simply because he couldnÃ¢â‚¬â„¢t wait another moment to have her. But what if has always stopped her from asking for it again. What if sheÃ¢â‚¬â„¢s not his flavor anymore? What if sheÃ¢â‚¬â„¢s not as sexy to him anymore? What ifÃ¢â‚¬Â¦ Now itÃ¢â‚¬â„¢s her turn to ask for a fantasy. What she craves is a simple request away, but only if sheÃ¢â‚¬â„¢s brave enough to share one of her biggest desires along with her biggest fear. This is the third short story in the serial release all featuring Aslan and Zeke. A married couple looking for more and finding it in the arms of each other. There are nine stories total. Short kinky stories meant to tantalize and excite you. May you fall in love with love and everything that word means to your fantasiesÃ¢â‚¬Â¦</p>

Share what you thought about Aslan's Desire and earn reward points.