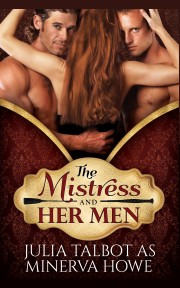 The Mistress and Her Men

From Julia Talbot, writing as Minerva Howe When Simon realizes his dearest friend Matthias is in danger from his reckless lifestyle, he decides to provide Matthias with an outlet for his self-destructive needs. While Simon would be more than willing to take on the task himself, Matthias has always fought their attraction to one another. As Georgian London's Mistress of Discipline, Felice Grey is happy to take on Matthias for one night as a favor to Simonâ€”even break her own rules to let Simon watch. She never expects to feel drawn to both men, especially since Simon's dominant nature makes it unlikely he'll bend to her will. Simon barely makes it through their play, and he knows it's time to withdraw to his country estate in hopes that his two favorite people will find each other. Felice and Matthias must make a decision. Will they let happiness fall by the wayside, or pursue it and damn the risk?


Second edition. The publisher has changed.

Share what you thought about The Mistress and Her Men and earn reward points.