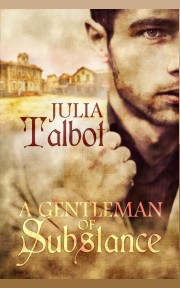 A Gentleman of Substance

Michael St. James hates tidewater post-Colonial Virginia with a passion. Banished there thanks to an ill-timed duel, Michael is bored with the countryside, and thinks his new companions are poorly-educated boors. What he needs is a challenge, something to stimulate his mind. Which is why, when Michael meets Daniel Calhoun, he takes such an immediate interest. Daniel Calhoun is a gentleman farmer who has no time for the social niceties demanded by a man of his station any more than he has patience for changing fashion or politics. When he sees Michael St. James, Daniel sees a man with no substance, and he's certainly not interested in becoming friends, or more, with the irritating man. There's more to Michael than meets the eye, as Daniel soon discovers, and the two embark on a scorching affair that might just be the ruin of both of them. Can they find a way to be together, or will Daniel and Michael be forced to hide what they feel? This title was previously published under the same title. 2000 words have been added to the text for the second edition.


Second edition. The publisher has changed

Share what you thought about A Gentleman of Substance and earn reward points.