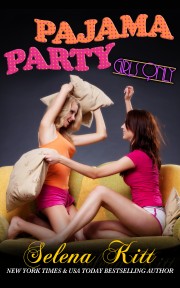 Selena Kitt's *Girls Only'where the girls get naughty together, but it feels oh, so good! April and Casey have been best friends since kindergarten, and they're about to go away to different universities on separate coasts. April plans one last sleepover at the end of the summer so they can do all those girlish, silly things together like doing makeovers and watching chick flicks and playing dress-up and having a cereal eating contest before they have to go be grown-ups in college. But when a game of double-dog-dare goes too far, the girls find themselves saying a far more heated goodbye than either of them had planned.

Share what you thought about Pajama Party and earn reward points.